The Bad Batch is finally here, and it sure is shaping up to be an interesting new entry in the Star Wars canon. We plan to break down each episode every week starting with a video that features the episode’s Easter eggs, references, and key moments, and then we will talk about all the good stuff each week on the livestream.

Make sure you are subbed to us on YouTube and podcast platforms so you don’t miss a single bad take!

Head on down below for our breakdown of The Bad Batch Season 1, Episode 1, aka, “Aftermath”.

Woo hoo, hey now everybody and welcome to some new Star Wars content to consume and deconstruct with your pals from the Star wars Time Show. It’s time to breakdown the Easter eggs, references, and key moments feature in The Bad Batch, S1E1, aka, Aftermath.

I’ll start with the eggs and references, which kick off with a great nod to the Clone Wars voice over guy and how that series used to start. We even got to see an animated version of Kenobi and Anakin saving Palpatine from Revenge of the sith.

The next suite of eggs and references were this episode’s best, because we get to see Depa Billaba and Caleb Dume in action. For those keeping score, Caleb is Kanan Jarrus, so yeah, it’s a doozy in terms of Star wars lore.

We then get a mention of Kenobi hunting Down Grievous from Tech, so another nice reference to ROTS.

We’ve seen in before, but it was a sad treat to see Order 66 again, and from a new perspective as we get to see Depa’s execution, and a new take on Caleb’s escape. Previously, it was not mentioned that Hunter helped him get away, but apparently that is new canon now and I’ll take it.

And for fun here’s a dead Jedi, who appears to have green and purple fingers and a gold inlaid lightsaber.

Tech drops a nice callback line to something Kenobi says to Luke in A New Hope when he tells Echo that he’s more machine now than man.

Up next we get a nod to Palpatine’s Empire Day speech in which he declares the jedi traitors and himself the new Emperor of the Galactic Empire, so another nod to the events of ROTS.

In a callback to a scene from Attack of the Clones, we see the same room that Kenobi met with Lama Su and Taun We when the two meet with Admiral Tarkin to discuss the future of the clones.

Tarkin gives us another reference to the clone wars when he has the bad batch tested in the training room, which was featured early on in The Clone Wars and made clones like 5’s famous.

During their test the batch are challenged by what could be the precursor for Dark Troopers, and we also get a Felucia reference from tech.

Tarkin sends the Bad Batch to Onderon to take out some insurgents, but they find Saw Gerrera and refuges instead.

On this same mission it’s revealed that an IPD is following them, so these little buggers are being put to use by the Imperials already.

I guess this is at least a reference, but it is revealed that Crosshair’s inhibitor chip is functioning, which is why he keeps wanting to be a shit head, so while the other bad batchers were completely unaffected, he was.

And at the end of the episode Hunter wants to head to J-19, which apparently is the Salucemi system, so there’s a good chance the guy he knows is Cut, a clone who broke his conditioning early on in the Clone Wars and started to live a normal life. Cut is actually teased in the Episode 2 description, so you can probably take this prediction to the bank.

Alright, and now for this episode’s key moments!

First and foremost, getting to see Caleb and Depa in action, and their fates was a treat that I didn’t expect, but should have saw coming. They were teased in animated form during The Clone Wars’ final season, so it only made sense to feature their Order 66 ordeal in the premiere of the Bad Batch.

I loved getting a new perspective on Order 66, especially seeing how it affected or didn’t affect the bad batch, not to mention witnessing some new lore for Caleb Dume’s escape. Previously, his fate was depicted in a comic book run, but this episode added some meat to it by making Hunter his savior of sorts. This could lead to another Caleb moment down the road, which is exciting.

Meeting Omega officially was also a key moment, and as we learned, she is special like the Batch, so she will undoubtedly be the driver of some of this show’s more mysterious plot points. Plus, she’s just rad and has a great New Zealand accent.

Throughout the episode I appreciated the handling of Crosshair’s betrayal. The scenes featuring him pleading his loyalty to orders and the emperor early on, plus him reporting that Caleb got away should have been a give away that his chip was functioning more so than his brothers, but I still appreciated how his turn was explained and slowly built up to from the literal start of the episode when he couldn’t help but try and kill Caleb.

I also appreciated how Saw and his band of survivors were classified as insurgents by the Empire as it showed how screwed up the galaxy already was at this point by having the Empire turn on those who fought by its side when it was still the Republic. One could argue that Saw’s little speech to the Bad Batch was the birth of the rebellion, at least his version of it.

I think we all know there was something mysterious about Omega, but Tech confirmed it when he figured out that she was the fifth and final enhanced clone. This plot point will be a main driver of the narrative this season, and we still don’t know what her powers may be, but she seems to be able to mimic hunters every action, and she was a natural with a blaster, so I’m wondering if she’s a hybrid of all the Bad Batch’s abilities. Something like a perfect enhanced clone.

Although, in this next key scene, Omega reveals that she knows Crosshair will turn, so it’s almost as if she can see the future or sense things like a Force user, so maybe her enhancements go beyond just some tinkering and may include some Force trickery.

And the final key scene is of course seeing Crosshair in his new Imperial armor, which completes his betrayal I predicted months ago via one of the trailers. Although, there appears to be some hidden agenda with Nala Se and the Kaminoans, because she does help the Batch escape, and her and Lama Su talk about hedging their bets against the Empire, so keep an eye on them and Omega moving forward.

What a premiere my friends. I think we have a great new Star Wars show on our hands that will shed some light on a time period not often covered, so I can’t wait to see what’s coming in Episode 2 when the boys meet Hunter’s contact.

Make sure to tune into the next episode of the Star Wars Time Show in which myself and my co-host Nick will fully breakdown Aftermath and give our thoughts on it as a whole. 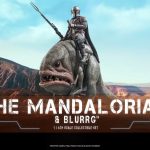 Hot Toys and Sideshow Unload All Sorts of New 1/6th Figure Reveals From The Mandalorian, Bad Batch, and Clone Wars