Disney has dropped a clip for the upcoming episode of Star Wars Resistance, and based on it, it looks like the First Order is up to even more shady stuff on the Colossus.

The clip itself features a scene is Aunt Z’s bar. In it, Tham, Torra, Neeku, and Kaz are looking for Hype Faison, so they question a few First Order Troopers about his whereabouts. After they tell him he left the station, everyone but Tham is suspicious of the First Order’s answer and dealing on the station in general. You can tell that she still respects the Order and considers them to be a helpful force, and one that needs to be respected.

I’m telling you, this character is going to get Team Fireball in trouble whether she knows it or not. I think she’ll do it unknowingly, but her love of the Order will cost her friends.

The new episode – “The Disappeared ” – will also be available SUNDAY, FEBRUARY 24th (12:01 a.m. PT) on the DisneyNOW app and Disney Channel VOD, giving kids and families access to the series wherever and whenever they want to watch. 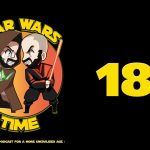