Taika Waititi won himself an Oscar last night for JoJo Rabbit and his best adapted screenplay for it, but before he took home the gold, he did an interview with ET in which he was asked about the recent rumor that he’s going to be involved with a Star Wars movie.

He didn’t completely pour cold water over it, but he gave no indication that it was true either. He played it off by asking what does being “approached” even mean, so maybe there’s some room in there to postulate that he has been, and talks have taken place, but nothing final has been decided upon.

Considering Feige’s role with Lucasfilm now, and Taika’s success with JoJo, the MCU, and now The Mandalorian, I still won’t be surprised if we do one day get confirmation that he’s helming a Star Wars movie, but for now it’s pretty clear that he’s not allowed to talk about it and will focus on his confirmed projects.

If he does do a movie, what type of film would you want it to be? Let us know by leaving a comment down below. 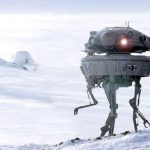