One of the newest and most ambitious Star Wars projects, Star Wars: Visions, will make an appearance at Anime Expo Lite on July 3rd, and according to this announcement, the series will release later this year on Disney+.

For those of you who are unfamiliar with Star Wars: Visions, it is an anthology series composed of animated shorts done by 10 different Japanese animation studios. The shorts will not be direct copies of previous scenes, but will serve to celebrate Star Wars in a completely new fashion.

We will give you more information on the release of Star Wars Visions once the release date is revealed. 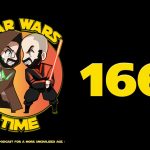