It’s a busy Bring Home the Bounty Tuesday thanks to a new round of collectible reveals, and it feels like every Disney+ Star Wars series got some attention this week from multiple different lines. The same can’t be said for the HasLab Rancor, which missed its funding goal of 9,000 backers. Boo-hoo.

The Black Series line sees the arrival of Throne Room Boba, who joins Fennec Shand as the first two official The Book of Boba Fett figures to be offered to collectors. The new Boba Fett will go up for pre-order tomorrow at all retailers, while Fennec is currently available for pre-order now. You can find her over at EE today, and Boba Fett will be there tomorrow after 1PM EST.

The Vintage Collection line is getting three new deluxe sets, and they’re all based on moments from The Mandalorian. There will be two new Trooper sets from the Nevarro battle, and an Ahsoka and Grogu set. These too will go up for pre-order tomorrow, so hit this Entertainment Earth link when the clock strikes 1PM EST on 12/8.

In a surprise reveal, Star Wars: Visions is getting some love from S.H. Figuarts in the form of the twins that were featured in the series. Karre and Am can both be pre-ordered now from Target for a beefy price of $85.

Nick and I will talk more about these new reveals on today’s episode of the SWTS, so don’t forget to tune into the Star Wars Time Show on a weekly basis via our podcast platforms or via YouTube if you prefer the livestream angle. 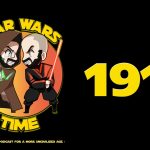