This episode takes us off of the Colossus Station and into the Unknown Regions of space where Kaz and Poe are going to investigate what they think is a derelict First Order station. They quickly find out that the station is derelict, but it is also set to be destroyed! Bring in Captain Phasma, Major Vonreg, and some First Order troopers and we are in store for one of the best episodes of the season!

Give the cast a listen and let us know what you thought about this episode! You can also check out our video recap and review, as well as an Easter Egg breakdown of the episode. 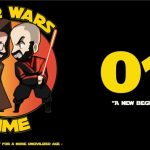 Welcome To The Star Wars Time Show: Our Intro