Welcome back Star Wars fans! This week on the Star Wars Time Show we are going to cover a multitude of topics from all different reaches of the galaxy.

First up on the agenda is a couple of brand new toy announcements. First, Matt breaks down what makes the new Black Series General Grievous the new must have toy for prequel enthusiasts, and then we take a look at the incredibly detailed Hot Toys Director Krennic! If you want to see photo realism at its best, look no further than this new figure.

Next on the docket we discuss a new interview from Disney CEO Bob Iger where he goes over his plans for Disney+ and what it may and may not have in store for Star Wars fans.

We also go over some good news for fans of Star Wars: Resistance. The show is coming back on January 13th, and season 2 is a go!

For the final segment of the show we cover all of the Star Wars Episode IX rumors and stories that we could find on the internet this week including Mark Hamill channeling Ariana Grande for the movie’s title reveal; an off the wall theory about a possible force ghost Leia, and some subtle hints dropped about the movie via some cast and crew gift bags!

Make sure you hit the Like and Follow buttons on our social media channels, and be sure to Subscribe to our podcast feeds through the links below! 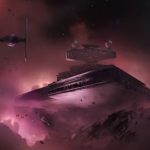