Star Wars fans, welcome to the latest episode of the Star Wars Time podcast show! We are still currently being hosted on the Entertainment-Buddhacast network for the show feed, but soon we will be hosting it on its own feed right here on Star Wars Time! Please stay tuned for the cutover, which we plan to happen after one more show airs on the EB network after this one. So if you’re keeping score, this is our penultimate episode, and we will do a final episode before making the full switch to StarWarsTime.net.

In this penultimate episode we talk about a few rumors swirling around Star Wars: Episode IX and The Mandolorian. For Episode IX, we touch on a rumor that Luke will appear in coproreal form, and not be a Force Ghost. We wonder how that would play out, and who he’d be visiting in this form. For The Mandolorian, we talk about a recent run of casting rumors that involve Carl Weathers and Nick Nolte.

Nick and I also recap the Easter eggs from episodes 8 and 9 of Star Wars Resistance, and we discuss how awesome the new Galaxy of Adventures shorts are.

You can hear this and more by tuning in above via the YouTube video version of the show! Fear not, in a few weeks the show will be fully ported over to its own podcast feed, so you will eventually be able to subscribe through more traditional podcast formats. 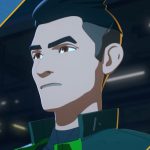 Know Your Star Wars: Who is Kaz Xiono?