Book 2 of Star Wars: The Rise of Kylo Ren wastes no time getting to the meat of the story that we all want to hear. The issue is again split into 2 subsections: Ben and Snoke after his escape from the Jedi Academy & a flashback with Luke, Ben, and Lor San Tekka.

The issue opens with the continuation of the conversation happening between Snoke and Ben, and Snoke is clearly playing the role of nurturing mentor at this point to the young boy who has just abandoned his known life. This section also brings up the idea of Ben choosing a new name to fit better with his true identity, but the official Kylo reveal doesn’t happen quite yet.

After the opening conversation between Ben and Snoke closes, the issue pivots to a flashback of the first time that Ben encountered the Knights of Ren. He was on a discovery mission with Luke and Lor San Tekka to the edge of the Outer Rim. This is where we get our first official Canon mention of the High Republic era, so it looks like the rumors that have been swirling are already coming to fruition.

The flashback also establishes that Snoke and Ben were already well acquainted via Force communication at this point in his life. Snoke is already planting seeds similar to what Palpatine did with Anakin. Saying that he is capable of more than Luke is allowing him to do, etc.

We get to see Luke in action after a brief interaction with the Knights of Ren on Elphrona, the planet mentioned above, and it is clear that at this point in his life, Luke is basically untouchable to any known opponent in the galaxy. But, the seeds of Ben’s darkness have now been brought to his attention by the Knights.

Overall, this issue moves in the exact direction that I hoped it would. Exploring more of Ben’s very interesting history and diving deeper into his formative years at the Jedi Academy. We can look forward to his encounter with the Knights of Ren as newly minted a dark side disciple in the next issue.

Book 2 of Star Wars: The Rise of Kylo Ren starts filling in all of the gaps that we want to know about the fall of Ben Solo. 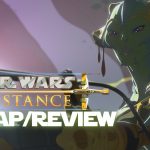 Star Wars Resistance Season 2, Episodes 15 and 16 Recap And Review – “The New World” and “No Place Safe”