Last night Lucasfilm officially unveiled Star Wars: The High Republic, which until now has been secretly dubbed Project Luminous. We now know what’s in store for this untouched era in Star Wars storytelling, so we put out a helpful short video to recap exactly what the High Republic era projects will entail, and what type of stories you can expect.

Don’t get your hopes up for any games, movies, or TV series being dedicated to this era quite yet, but you never know what another few years may bring.

Get all you need to know about Star wars: The High Republic by checking out the video breakdown below!

It was a bit of a rocky reveal for Star Wars: The High Republic last night, which is the formal name of the Project Luminous initiative now, but thanks to a video and an article on StarWars.com, we now know what’s in store for this untouched era in the Star Wars galaxy.

Star Wars: The High Republic will be set 200 years prior to the events of The Phantom Menace, and feature an era in which the Galactic republic and the Jedi Order are at their peak power and influence.

This timeline doesn’t overlap any existing filmed Star Wars projects, or planned series, so it will be ripe for brand new tales that aren’t beholden to the Skywalker Saga, or any other existing Star Wars canon.

As Lucasfilm execs are explaining, we will get to see the Jedi in their prime.

But as creative director Michael Siglain explains, something wicked is bound to cause turmoil in this glorious era for the Jedi and the Galactic Republic.

In fact, he teases that we will learn what scares a Jedi, and the main story will start with an event referred to as The Great Disaster.

While the Jedi will be a main focus, other factions will get some limelight too thanks to the sandbox Lucasfilm has given the creatives to play in.

As Lucasfilm VP James Waughn explains, while this was a golden age for the Jedi, it also was a time of galactic expansion and exploration, so many of the High Republic stories will focus on charting out the galaxy, finding new cultures, and discovering what early life was like out in the Outer Rim.

Jedi will server as Texas Rangers if you will while tending to the Outer Rim frontier, so we should expect different looking Jedi, and those who may be a little rougher around the edges.

Their main foes throughout the High Republic stories will be the Nhil, who are described as Space Vikings, but I’d imagine there will be a little Sith action here and there, because after all, would a band of Space Vikings truly cause fear in the hearts of the Jedi?

Star Wars: The High Republic stories will be told across a variety of mediums from different publishers, so expect adult novels, young adult novels, children books, and comics to be the main sources of this era’s narratives.

Claudia Gray, Justina Ireland, Daniel José Older, Cavan Scott, and Charles Soule has been tapped to craft this new era of Star Wars storytelling, and the first batch of High Republic titles will debut at Star Wars Celebration 2020 this August.

It looks like Soule’s is the adult themed entry, while Gray’s and Ireland’s are targeted for young adults and kids respectively. The other two are comic series, and their tones look to vary.

It doesn’t appear at this time that any Star Wars video games, live-action series, animated series, or film projects will be related to Star Wars: The High Republic. This era seems confined to books and comics for now, but that doesn’t mean that down the road we won’t see games and films that are set during this era. 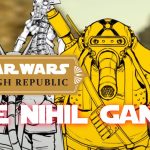 Who are The Nihil – Star Wars: High Republic Era Villains