The latest issue of The High Republic comic book series is out now, so head on down below to check out our breakdown of it and the events it unfolded!

The High Republic comic continues this week with the launch of Issue 3, and the lead Keeve Trennis took center stage as she and the other Jedi further investigated the disappearance of Ceret on Sedri Minor.

The issue opens with the Jedi Masters trying to deal with Terrec, who is clearly being influenced by whatever dark force jacked Ceret in Issue 2. Master SSkkeer is also still wonked up as his emotions are bordering on a Skywalker’s in terms of being a pissy Jedi.

Meanwhile, Keeve is talking to some locals who inform her that their own have been disappearing too, but their overly suspicious speaker, who is Kal Sulman, quickly tries to stop any talk about missing people. He clearly has something to hide, and the Jedi presence has him on edge.

Thanks to the two Masters feuding and being generally lost themselves, Keeve decides to head out and look for Ceret herself, but she’s quickly joined by a little dude who wants to find his missing friend.

The unlikely pair find a sinkhole, and the kid jumps in like a daredevil, because thanks to the legends he’s heard of Jedi, he knew Keeve would save him, which was a fun nod to how the Jedi were revered at this time, and a kid’s approach to testing their legendary status.

The Masters continue to argue while Keeve is on the hunt, but Avar at least starts to figure out what we as readers already knew, the Darkside is strong on this planet, and it is more than likely responsible for Ceret and the other towns people disappearing.

Keeve also starts to be overcome with feelings of darkness as she goes deeper into the ground. She ultimately ends up finding the missing people and Ceret, who seem to be sealed into some sort of organic structure, similar to how Xenomorphs used to store their prey for the queen in the Alien franchise.

Naturally, the little kid was upset by the site of his dead friend, but Keeve, being the seemingly awesome Jedi that she is, uses a clever floating lightsaber trick to calm him while she tried to free Ceret.

Unfortunately from them both, the cave comes alive and tentacles reach out to grab the kid, but Keeve quickly slices it in half with an impressive lightsaber force move.

Sadly, the tentacles was just a tease, as the true monster is finally revealed to Keeve in the form of a Drengir, which are essentially deadlier versions of Audrey from Little Shop of Horrors.

Back on the ship, things get real dark after the Drengir reveal themselves, because Terrac pukes out some black goo on SSkeer, which seems to fully jack up his busted mine with even more seeds of darkness.

Down in the hole Keeve is being overwhelmed by a Drengir, and just as it looks like she’s going to be lunch, Avar comes in with a helluva save, slashing the Drengir open like a meatball sub.

It wasn’t enough though as the issue ends with more Drengir rising, but this time, they have their own Jedi as it’s revealed that Sskeer has been fully overtaken by their powers. He’s even given a new arm for his allegiance!

I continue to be a fan of this comic book run, and Keeve herself. We got a lot of inner monologuing with her today that exposed more of her true thoughts, and I appreciate getting a peek into a Jedi’s mind when it’s not being Jedi speaked to death. It just makes her feel more relatable, and not like some of the stuffy Jedi we’ve come to know over the years.

I also continue to appreciate the slow descent of Sskeer into darkness, and how other Jedi Masters are dealing with it. His little spats with Avar were quite revealing about his condition and the power of the Darkside, plus it was great to finally learn what has been messing with him all this time.

Nick and I will talk more about this issue in next week’s episode of the SWTS, so don’t forget to tune into the Star Wars Time Show on a weekly basis via our podcast platforms or via YouTube if you prefer the livestream angle. 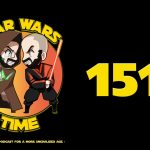