The Star Wars: The High Republic comic book launched this week, and because I don’t like reading books, I decided to take on the comics to see what this new era of Star Wars is all about. While I usually just breakdown new canon that the Star Wars comics provide, with this run I’ll do more of a recap/review, so head on down to see what the first issue of The High Republic was all about.

The High Republic era of Star Wars was finally ushered in this week, and while most of the novels have too many words and shit as we say on the Star Wars Time Show, I do want to try and stay on top of the main comic book run, so I threw in on the first issue, which is out now and features a tale about Padawan Keeve Tannis.

I usually just try to mention new canon in my Star Wars comic reviews, but considering this era is nothing but new canon, I’ll opt for more of a review style breakdown for this run.

The issue opens with Padawan Keeve Tannis being tested by her Master SSkeer, and I have to say that I instantly dug how Keeve is portrayed both visually and personality wise. I love the shaved head look, double sabers that can form a bo, and she just feels like a badass thanks to some of the feats we see her pull off. I’m liking this Padawan friends.

Like I said she is being trained by Master SSkeer who we learned lost an arm battling the Nihil, but it doesn’t seem to stop him from prepping his Palawan for the trials.

Which she begins, but as  most things Jedi padawan’s go, shit hits the fan and her trial becomes a life or death situation.

On the Beacon we also get to meet two Grand Masters in the form of Veter and our boy Yoda, who definitely is drawn with a bit more pep in his step thanks to him only being 700 ass years old. He does look like a little pimp though and I think he even has a different saber hilt than what we saw him use in the prequels. He still talks like an asshole though, so he’s had the backwards dialect his whole life.

The issue returns to Keeve, who is fighting for her life against some big ass bugs, who, through her force powers and skill, she realizes are going after her and the planet she’s on because of the Starlight Beacon, so again, her connection to the Force is powerful.

Thanks to Keeve saving the day during her trial, she is granted the rank of Knight after all, and based on her reaction to meeting Kriss, I again believe Kriss is akin to a Kenobi or Skywalker in the Order at this point. Their superstar if you will, but not a full on leader type.

The issue closes with a rad ceremony that shows off how powerful and influential the Jedi are in the galaxy at this time. It was an awesome spectacle to see a sea of lightsabers and the hooded figures wielding them. You really get a sense of how regal the Jedi were back then, so it definitely gave a great contrast to how the Jedi were portrayed in the Skywalker Saga films and surrounding properties.

What I liked most about the issue though is the mystery that it weaved around Keeve’s Master SSkeer. Based on some exchanges between Maru and Kriss, and then the cliffhanger ending, it definitely appears something is not right with SSkeer.

Make sure to tune into the next episode of the Star Wars Time Show in which myself and my co-host Nick will fully breakdown this issue of the High Republic comic series and give our thoughts on it as a whole.

The first issue of The High Republic comic series is pretty good, and it definitely introduces some intriguing characters. 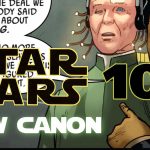