Hasbro has released some glamour shots for an upcoming Fall Convention Exclusive Star Wars the Black Series figure, and fans of Luke should be excited. The figure has been dubbed “Skywalker Strikes,” and it features him in his Yavin celebration outfit, as well as other accessories.

The official product information is detailed below:

Fans can imagine action-packed Star Wars scenes with this collectible 6-inch Luke Skywalker action figure and accessories. This Luke Skywalker figure in his Yavin Ceremony outfit features realistic design and detail inspired by the Star Wars comics. Multiple points of articulation make the figure highly poseable for play and display. Includes a Lightsaber, helmet, blaster, training remote, and more accessories. Limited quantities of this item may be available at other select conventions in South America, Australia, and Europe and online following the conventions. This item will also be available at select retailers in Asia and North America beginning November 4, 2019.

He should be available at most of the upcoming conventions around the U.S., Europe, and Asia. He will also be releasing at certain retailers in North America.

Now, there’s a bit of confusion around Luke’s medal, and if it will be included in the convention package, so you can check out FlyGuy for some more information on that.

Medal or no medal, this is a must own Black Series for me, so hopefully those of us not going to fall conventions can snag him for a decent price. 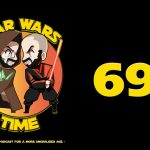