EA dropped the official reveal trailer for Star Wars: Squadrons a few moments ago, and while it was all cinematic in nature, it didn’t disappoint. Thanks to the reveal, we also got some new information about this mutliplatform starfighter Star Wars game.

Oh, and keep an eye out for a familiar Rebels character in the trailer at the 0:52 mark!

It appears that Squadrons will feature at least three different game modes based on its briefing page. There will be 5v5 multiplayer battles fleet battles, and dogfight battles, as well as a single player campaign. Based on the reveal trailer, I believe the campaign will be split between a New Republic pilot hero and a Remnant Empire pilot hero. If you have a PSVR or VR for PC, then the entire game will be playable in virtual reality with cross-play support.

We haven’t learned much on this yet, but based on some of the footage shown and the screenshots, it looks like the gameplay will be similar to a class-based shooter, so I’m guessing ship variety will dictate the type of combatant you are. Be it support or attack, it appears the ships are classed in a way to promote teamwork using various ship abilities to help out your squadron.

The game is available for pre-order on all platforms with an October 2, 2020 release date. Pre-order skins are detailed below. 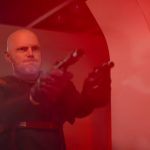 Bill Burr’s Mayfeld Not Returning for ‘The Mandalorian’ Season 2