Star Wars Kids has completed its speed run of the Star Wars prequels, which I might add is a great way to consume them if you’re not a huge fan of them like myself. I try not to knock them too much these days so I don’t sound like other angry asshole Star Wars fans, but I just don’t find them to be great narratives, even if they have some nice action beats here and there.

Anyway, like TPM and AOTC before it, ROTS now has a 5-minute slim cut courtesy of Star Wars Kids. I still contend that ROTS is the most egregious of the prequels due to how poorly it handles Anakin’s turn to the Darkside.

It just doesn’t feel justified in the least, mostly because the movie does nothing to show how much the Jedi had previously fucked with Anakin, as well as showing more of his own dark thoughts. When he flips on Mace it just seems way to convenient and not earned in the least. In fact, the only hint at Anakin’s darkness in the entire trilogy is when he’s lamenting and slightly reveling in his murder of sand people to Padme. That’s the only time to me that we saw hints of a man that could become Vader, but the films didn’t give us anymore, which is why I think ROTS fumbled its most important job.

Oh well, that’s my take, check out ROTS on a diet above.

Revenge of the Sith
0 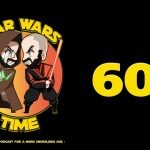 Rogue One Gets Recapped with a Rap