“Rendezvous Point” offered a direct return to the conflict between the First Order and the Resistance, which was a welcomed one after the past few episode of the show have mostly ignored this beef. This episode also gave us a great new character in the form of Venisa Doza, so with her talks to Tam, and of course her heroics, S1E8 of Star Wars Resistance ends up being a very solid entry in its final season.

The episode begins with the Colossus being under attack by the First Order, thanks to the fact that Doza activated a beacon to find someone. The Aces are getting beat down and Kaz about to be blasted, but Torra saves him and tells her Dad it’s time to stop waiting for the person they’re looking for, and to make the jump to light speed.

Just the Colossus zips away an X-Wing appears and is immediately attacked by the First Order. The X-Wing puts up a fight, but gets captured with the Star Destoryer’s tractor beam, so the pilot is pulled into hanger and taken away for questioning.

Back on the Colossus the Aces are lamenting their latest ass kicking while questioning Doza’s plans, which naturally pisses Torra off, so she leaves.

Meanwhile, back at Team Bad, Tam and Rucklin see the captured pilot, and Tam thinks she has seen her before, so she gets a little curious.

Kaz and Neeku talk about how Doza and Torra always get weird on this day each year, so Kaz heads up to Doza and Yeager to hash out a plan to help them contact the Resistance.

This is when he learns that they were only looking for one Resistance pilot, and that pilot is Torra’s Mom, Venisa Doza, the one captured earlier by the Order. Yeager tells Kaz to keep this info on the down low, and explains that it was Venisa who got Doza to defect from the Empire, and that she and him were pilots in the Rebellion.

Back on the First Order Destroyer Tam begins to talk to Venisa to figure out why she looks familiar. Venisa uses this time to questions why Tam is with the Order, and tries to show her that she’s being stupid.

At this same time her droid Torch, who has been playing dead, gets tossed into a pile of space trash, but then reactivates and heads towards Venisa’s cell.

Venisa keeps grilling Tam and even calls her by her name, which surprises little Miss DT-533. She keeps her engaged long enough to allow Torch to stun her and open the cell door.

Back on the Colossus Torra is sneaking around the hanger to try and escape to go find her Mom, but Kaz finds her. Instead of ratting her out though he says he’ll go with her, and learns that it’s her birthday and she just wants to see her mom.

At this point, Venisa is using Tam as a hostage to get off of the First Order ship, but she gets stopped by Rucklin, who luckily is a bonehead and allows Torch to shut a door in front of him to block his approach.

They all eventually get to the hanger and then all hell breaks loose. Torch starts blowing crap up to create a distraction, which he does quite well with.

Tam definitely questions what she should do at this point, but instead of knocking Venisa’s gun loose, she actually tells her to run and get off the ship, so clearly Venisa’s talks have been sinking in a bit.

Torch steals a TIE for one final distractions, which allows Venisa to get in her X-Wing and take off. As she leaves the Star Destroyer she picks up torch in space and they jump away.

Tierney then asks Tam if the pilot told her anything, to which Tam responds with a lie.

The episode ends with Kaz and the Aces surprising Torra with a booger tower looking cake, and then she and Doza reflect on the hero that is her mom to close things out.

I quite enjoyed this episode of Resistance, which put the main plot thread of the Resistance versus the First Order front and center. I have to give credit to the character of Venisa Doza for doing so, and for her great little story in this episode, which shed some light on our other characters’ pasts.

She was also a great vehicle to connect us back to Tam, who has been out of the picture these past four episode or so. I just really enjoyed her little talks with Tam, because they reflect what all of us fans have been thinking since she joined the Order at the end of Season 1. We all know she’s too naive to get the big picture, so it was nice to see that someone could get through to her, and I think Venisa, being a strong female pilot, and connected to people Tam knows, was the perfect character to get Tam hopefully back on a path of redemption.

I have to also mention that I really appreciated the bond between Venisa and her droid Torch, who like most Star Wars astromechs, more or less saved the day for its human companion. Torch is a boss, and is on R2’s level when it comes to pulling off impressive escape plans to save their meatbag overlords.

You can never go wrong with Resistance when it goes heavy on First Order and the Resistance struggle plot points, so it was awesome to get back to the basics in Rendezvous point.

This episode finally put the struggle between Tam's First Order and Kaz's Resistance back at the forefront, so of course it was one of the better early episodes of this show's final season. 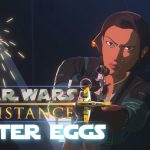 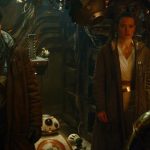 J.J. Confirms ‘Rise of Skywalker’ Finalized and That The Full Script Did Leak Due to an Actor