Star Wars Resistance continued this week with another solid episode, giving us two good ones back-to-back after a run of less than great episodes kicked off its final season.

In terms of Easter eggs, S1E8 offered up seven good ones, with a mix of pure eggs and references for Star Wars fans to enjoy. As always you can check them out below in video or scripted formats.

The first easter egg comes in the form of Venisa Doza’s helmet, which is shaped very similarly to a Rebellion era A-Wing pilot helmet with a bit of modern Resistance pilot flair.

The next moment of note is more of a reference, but it happens when Ms. Doza’s X-Wing gets caught in the Star Destoryer’s tractor beam, which is a very similar moment to when the Falcon got sucked into the Death Star’s hangar thanks to a pesky tractor beam.

Up next we get another reference, this time to a planet that was first mentioned in the old Expanded Universe when Venisa talks to her droid about pulling off a stunt similar to one they used at Bakura. Truce at Bakura anyone? A Nice nod to an iconic legends era book.

As Venisa’s ship is being forcibly grounded on the star destroyer you can hear a horn blaring signifying something is coming in for q landing, and the sound is the same horn sound we hear when Vader’s shuttle is landing on the second Death Star at the beginning of ROTJ.

Venisa was loaded with eggs and references in this episode, as she also dropped our next reference when she mentions that First Order troopers and pilots remind her of clones while talking to Tam, a clear nod to the Clone Wars era.

Venisa’s droid Torch offered up our next egg in the form of a detonator he used to provide a distraction so they could escape, and the explosives were the same style of bombs Han used in ROTJ to bring down the shield generator on Endor.

Our final moment is a reference to an iconic Star Wars line, but with a twist. A Trooper calls Venisa Resistance Scum, which is a cheeky nod to the infamous Rebel Scum line spoken in ROTJ.

Stay tuned for our recap and review of this episode, which will be uploaded shortly. 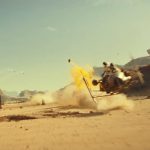 First Clip Released From The Rise of Skywalker 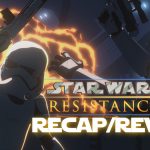