Star Wars Resistance finally got back to its Skywalker Saga roots in “The Relic Raiders”, which not only featured mentions of the Force and its users, but also looped the First Order back into the show’s plot.

Head on down below for my full recap and review!

Hey now fans of the Resistance,

The episode begins with Doza and Yeager sending Kaz, Torra, and Freya to go get supplies from a nearby planet, even though you can tell they can’t trust Kaz to not screw up.

While packing for the trip, Kaz is approached by Kel and Eila, who convince him easily to let them stowaway so they can head down to the planet’s surface too.

The trio, alongside CB and the hidden kids, land on a jungle-like planet, but it seems deserted, so Freya and Torra split off to look for the supplies and to see where everyone is at.

This allows Kaz to check in on the kids, who have of coursed not listened to him, and are headed to a temple they found.

Inside the temple the kids explain to Kaz that it’s a Jedi force temple, which he takes as well as Han Solo in regards to his belief in the Force. They then hear a voice coming from deep within the temple, so the kids run off, forcing Kaz and CB to chase after them.

Inside this new area the kids get split from Kaz when he trips a floor switch. Kaz and CB head off to look for a way to find the kids, but klutzy Kaz trips another switch, and this time he gets his ass shocked by red lightening, which basically turns him into a drunk person.

He stumbles into another room, and in the center of it is a relic that he can’t help but reach out and touch, which of course opens a trap door, so he falls in and gets further separated from the kids.

Within this new room Kaz is approached by a tough as nails old lady who roughs him up and then proceeds to power choke him with just one arm. Once she realizes he’s not looking for her, she relents and explains they’re in a Sith temple.

Meanwhile, Torra and Freya have jacked some supplies, but they can’t reach Kaz. While in their ship they see three new ships on their scanners, and they aren’t friendly according to Torra.

Back in the temple, CB finds the Kids and has them follow him to Kaz’s location.

Speaking of Kaz, he and the old lady are discussing how she’s trapped too after raising the sith temple to be raided. She tries to keep Kaz still so he doesn’t trip another trap, but that doesn’t last long as he hits another switch, but this time it turns on a death trap that causes the room to spin like a carnival ride.

At this moment the kids and CB show up, so the lady tells them to find Sith symbols and touch them. After touching two at once the death machine finally stops, so Kaz and the lady make it out unscathed.

The old lady takes the Sith Relic that initially got her trapped, but before they can get out, Kaz hits another freaking button, which causes the temple to fall apart.

The group gets out in time, but they see that Torra and Freya have been contained by a group of unique looking First Order troopers.

The old lady explains that they’re First Order Raiders, and they hunt down relics for the Supreme Leader. Kaz wants to make a plan to save his friends, but before he can lay it down, the old lady disappears.

Of course Kaz and the kids then get caught by the Raiders, so they’re rounded up with Torra and Freya.

Luckily, the lady returns and taunts the First Order with the relic. She turns it on and tosses it at the troopers like a grenade. It explodes with red energy that essentially vaporizes the troopers, while allowing the good guys to escape.

With the troopers gone, Kaz and gang offer the lady a chance to come back to the Colossus with them since her ship was blown up, and she agrees. She reveals her name as Meeka Grey, the latest character to join the Resistance family.

As the episode closes, the Kids thank Kaz for taking them on the trip and not getting them killed. Eila then talks with Meeka and asks her about the Force. Meeka says she does, but she’s not a Jedi or a Sith, so she’s a Maz Kanata type for sure.

It was nice to get back to some mystical Star Wars lore in an episode of Resistance, as well as the First Order’s return to the series. Even while we didn’t get any new insights into Tam’s journey, this episode at least felt like it was touching on the series’ overarching plot lines again, which have mostly been avoided in the last 2-3 episodes.

I personally liked how the episode folded in talk on the Force, the Jedi, and the Sith, which have all been mostly ignored in this series. It helped to tie the franchise back into the the Skywalker Saga, and offered up a few new insights into what Snoke was up to during the Age of Resistance.

In particular, I thought it was cool that this episode introduced First Order Raider troopers, and their main mission of collecting darkside relics for Snoke. It added some more flesh to that character and his role with the Order, and possibly with the Darkside as a whole, so it was nice to get some nods for him, as well as how important the Force is in this galaxy.

The introduction to Meeka Grey was well done too, and I’m intrigued by the fact that she has seemingly joined the show’s cast of secondary characters that show up in main plot threads over time. I don’t think this is the last we will see of her, and her clear connection to the Force may bring even deeper insights into Star Wars mysticism before the series plays out.

The Relics Raiders finally felt like it was adding to the show's overarching plot thanks to its inclusion of Skywalker Saga motifs such as the Force, Jedi, and Sith, as well as the return of the First Order into the fray. 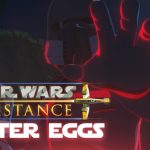