Star Wars Resistance Season 2 continues its slow pace with its latest episode, which is titled, “From Beneath”. Much like “Hunt on Celsor 3”, this episode completely ignores the series’ overarching plot with the First Order in favor of a self-contained episode that fleshes out relationships with fringe characters.

You can check out my full recap and review below in video or scripted formats.

Hey now fans of the Resistance, Matt Heywood here to recap and review Star Wars Resistance: From Beneath, aka, Season 2, Episode 6.

The episode begins with Kaz, Torra, Flix, Orka, and CB basically crash landing on Flix’s home planet so they can get fuel for the Colossus.

Upon their arrival, they meet Flix’s cousin Flanks who gives Flix a hard time for leaving his family behind to pursue a career as a cantina singer as Flix pleads with him for some fuel.

Flanks explains that they’ve begun deep core drilling to find even more fuel, but this causes Flix to worry that they may have awoken some fabled dragons by doing so.

At this point, their drill gets stuck after everyone hears a roar, which again Flix thinks is a dragon, but his cousin just chalks it up to the drill getting stuck and making noise. He makes a deal with Kaz that if they help fix the drill, they can have their fuel, so the group heads underground.

On their descent the elevator starts to crash thanks to the clear dragon stalking them, but Flanks continues to deny its existence.

While the lift starts to fall Torra and Orka jump out onto its track and begin to climb out while Kaz and the gang stay on the lift as it crashes to the ground. Luckily, everyone jumps at the last minute, nearly escaping with their lives.

Flix and Flanks continue to disagree over the existence of a dragon while Kaz finds himself stranded on the opposite side of a chasm.

Torra and Orka continue to climb out of the cave and she has to motivate his little chubby ass to do so, but the thought of saving his boy Flix is all the motivation he needed.

Kaz finally comes face to face with the dragon, so he confirms its existence to Flix and Flanks when he meets up with them again.

Flanks still doesn’t believe Kaz, so they get the drill started, but it just causes more roars to be heard.

At this point the dragon shows itself and snatches Flanks away, but CB scares it away with a light.

Torra and Orka make it topside and argue with Flix’s relatives until Flix takes it upon himself to march back on their ship and go down to save his buddies.

Kaz, CB, and Flix eventually free Flanks from the dragon, but they give chase.

3 dragons now have Kaz and company cornered, but they realize they can’t be seen if they stay still so they don’t move and hatch a plan involving Flix being bait so Kaz and turn all the cave lights on.

Which he does, and the dragons freak out and run back to their hole. At this point Flanks blasts it shut and commits to stop deep core drilling.

Flanks gives the good guys and girls their fuel, and then they fly off to the Colossus.

Unfortunately, we hit another self-contained plot episode with From Beneath, which ultimately didn’t add much to the overarching narrative of the Resistance being on the run from the First Order.

It’s as if the writers didn’t know this was the show’s last season, so early on they wrote episode like this that are more geared towards fleshing out characters and relationships, than actually pushing the main narrative forward of the Colossus being on the run from Pyre and the First Order.

Hell, we haven’t even touched in on Tam’s thread in over two episodes now, so I thought it was odd that we’d get another self-serving episode of Resistance so soon after we just watched the one with them hunting for food.

It’s as if this season has become nothing more than the colossus scavenging for resources, which makes sense, but we need each episode framed around the overarching plot point of the galactic conflict taking place instead of side stories about Flix’s home world.

This episode just felt like a throw away one, which is disappointing considering this is the show’s final season.

Much like "Hunt on Celsor 3", this episode skips the First Order stuff in favor of a self-contained plot featuring a family reunion for a random side character. 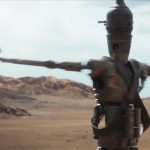 ‘The Mandalorian’ Getting a Special Look During MNF Tonight, Plus IG-11 Speaks