Star Wars Resistance continues its run towards its finale in Live Fire, which is the third episode in the show’s second and final season. In terms of Eater eggs and Star Wars franchise references the episode was light, but there were two of note, so I break them down below.

It really was an episode devoid of awesome eggs and references to spot, and while there were a few old ones to see, like the Salacious Crumb poster in Aunt Z’s bar, there were only two brand new ones to mention. Honestly, they’re not even that awesome either, but eagle-eyed fans may have picked them up, so you can make sure by watching the breakdown video below. 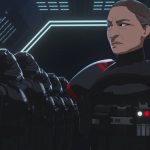