Star Wars Resistance: The Escape has wrapped up the show’s two year run, and I can say that it’s sad to see it go. I’m guessing this show, like many other Star Wars projects, suffered a bit due to how Disney has been handling the license, and its knee jerk reactions to TLJ hate and Solo fails, so it’s probably ending earlier than it could have, but at least it ended on a great note.

Find out about Kaz and company’s last adventure below in video or scripted formats.

Hey now fans of the Resistance, which is sadly over now, but not in real life, Matt Heywood here from the Star Wars Time Show to recap and review Star Wars Resistance: The Escape, aka, S2E18, the shows over folks.

The episode opens with Tam and Ruckland witnessing the destruction of the Aeosian people on Aeos for helping the Colossus two episodes prior.

This is the last straw for Tam, as she reprograms a mouse droid to help her escape after witnessing this atrocity against innocents.

Meanwhile Supreme leader Ren checks in for the first time on the show, mostly to mess with Tierney and Pyre for their failures, which he makes clear will no longer be tolerated.

After their meeting Tam sneaks in with the mouse droid to steal back her com unit, and she then uses it with the droid to call the colossus to setup a rendezvous.

Kaz gets Tam’s message back on the Colossus and learns that she wants to meet them back on Castellon. Kaz goes to Doza to see if they can go, but Yeager thinks just he and Kaz should go in case it’s a trap, so Doza agrees.

Back on the Star Destroyer, Tam preps for her mission, but gets interrupted by Tierney, who places Rucklin with Tam because she thinks something is up.

Yeager and Kaz land on Castellon and wait for Tam, who jumps away with her squadron to meet them, which causes the First Order to be alerted. Tierney has a hunch from this and finds that Tam’s com unit has been stolen, so she knows what Tam is trying to do. Her and Pyre jump the destroyer to follow Tam.

While Yeager and Kaz are waiting, Tam shows up, but Rucklin notices them sitting there, so he orders the other TIEs to attack, which they do. Tam orders them to stop, but they won’t, so she shoots her escorts down and then links up with her former friends.

Tam and Kaz hug while Yeager tries to play angry Dad, but their reunion gets cut short when the First Order shows up and starts blasting at their ship.

They try to escape but get caught up in a tractor beam. Yeager sets the ship to blow, so while Tam and Rucklin get arrested by the Order, they sneak off with CB. The ship blows up, causing a distraction, so Yeager and Kaz grab some blasters and start a bit of chaos.

Meanwhile, Rucklin found out where the Colossus is, so he tells Tierney and Pyre, so they jump towards the fueling station to take it out once and for all.

Yeager and Kaz eventually free Tam from her captors, and she proceeds to knock Ruck the F out. They head off to find a way to warn the Colossus now that they know they’re jumping towards it.

Back on the Colossus, Doza rounds everyone up to see if they’d be willing to fight the Order to save Kaz, Yeager, and Tam, but he’s not getting much support. That’s until Neeku shows up with the Holorecording from Kaz, who then pleads with everyone to not help them and to run away. Tam also pleads with them to run and she apologizes, but all this does is motivate the Colossus citizen to fight after all.

Kaz, Tam, and Yeager eventually get caught by Pyre, who was waiting for them in a hanger.

Meanwhile, the Aces and Jade squadron roll out to start a massive space battle with the First Order. They’re trying to attack its engines, but the shields are too strong. Luckily, CB gets the shields off, so the Colossus and Aces start pounding the Destroyer with great effect.

The commotion causes a firefight to break out between the good guys and Pyre while the Order starts landing units onto the Colossus.

At this same time it looks like Pyre is going to finally kill Kaz, but CB saves the day and takes a solid smack for her efforts.

On the colossus the citizens are putting up a fight against the First Order with everyone involved, even the janitor guy and his floor buffer!

The Destroyer is greatly damaged by this point, so Kylo rings back in to Force choke Tierney to death for her failures, while Kaz and the good guys escape just in time as the destroyer explodes into space dust.

The good guys land back on the Colossus and Tam has some emotional reunions with her Team Fireball pals. Then the series wraps with the full Colossus crew celebrating in Aunt Zs as she proclaims they’ve all become Team Colossus.

What a great series finale for a show that probably should have gotten one more season, especially now when we know that Star Wars stories related to the Skywalker saga are gone for good.

I could argue that this finale didn’t have enough consequences for the good guys, but in the end it’s a cartoon after all, and it’s not like many good guys ever die for their causes in Star Wars after all. At least not until they’re old and have a young cast to replace them.

What I enjoyed most though was the fact that the show tied off all of its own threads with this finale, while also weaving in some legit emotions thanks to Tam’s reunion with Team Fireball.

I 100% experienced some big boy feels when she and Kaz hugged, and again when she returned to the Colossus and saw Neeku for the first time. I had genuine reactions to both moments, which is proof to me that the story told was solid, and that the show in general resonated with my Star Wars fandom on a true emotional level, which should say something about the merits of Resistance.

It may not have been perfect at times, but I’m grateful to have been a fan of the show, and I’m also pleased with what it contributed to the Star Wars universe. The character of Kaz is both memorable and a unique take on a Star Wars male lead hero, so I loved watching him grow over the two seasons, and how his relationships with all of the other characters are what made him the true hero in the end. He may not have been cool like Han, or gifted like Luke, but his klutziness and penchant for doing the right thing made him his own brand of Star Wars hero, and I love him for it.

Not to mention all of the other main Resistance characters, so it is a bit bittersweet to be saying goodbye to them and this show so soon.

Hopefully this means a spot has been opened for a new Star Wars cartoon now, because you know we are always down with some animated Star wars adventures.

The Escape provided a great end to this Star Wars animated series by wrapping up all of the show's narratives, while also giving fans a few emotional moments to remember the series by. 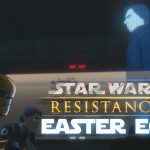