The final episode of Star Wars Resistance didn’t disappoint in the Easter egg department, so if you’re here for your final dose of Resistance eggs and ham, then head on down below to check out the breakdown.

We are Team Colossus!

Hey now fans of the Resistance, Matt Heywood here from the Star wars Time Show to breakdown the Easter eggs and references found in Star wars Resistance: The Escape, aka S2e18, the series finale.

Up first we have a callback to a planet and race we were introduced to a few episodes back thanks to the First Order wiping out the Aeosians on Aeos. Dicks.

We then get the arrival of the Supreme Leader himself when Kylo calls in to play a game of Force murder with Tierney and Pyre to light a fire under their loser asses.

The next egg is another callback to the show itself when Kaz and Yeager land on Castelon, next to the racing ring Kaz crashed into during the show’s premiere episode back in 2018.

We get a Jakku reference from Tam next when she talks to Yeager about a maneuver he pulled at the Battle of Jakku.

After Tam and Rucklin are escorted off of the transport ship they’re greeted by two First Order executioners, who first appeared in TLJ.

Speaking of TLJ, when Yeager, Tam, and Kaz are trying to get off of the Star Destroyer, the enter a hanger full of AT-M6’s and AT-ST’s, two First Order armored units first seen in The Last Jedi.

Flix and Orka give us the next egg when they wheel out what looks to be an e-web canon to help defend the colossus. We just saw one in Mando, but they first appeared in ESB.

Finally, are last moment of note comes when Kylo, channeling his best Vader impression, Force chokes Tierney to death for her failures. Like grandfather, like grandson. Atta boy Ben.

Those are what I got for you, but please let me know if I missed any by leaving a comment below. Good bye Resistance fans, it’s been fun, hopefully you’ll dig in to our other Star Wars content. 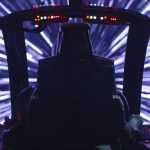 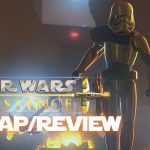