The conflict between the First Order and the Resistance once again took center stage in “Rebuilding the Resistance”, which also saw the Colossus officially join the good fight.

Head on down below to check out my full recap and review.

The episode opens with Venisa Doza and her Jade squadron arriving on the Colossus, because they’re going to team up with Captain Doza and the Aces for a mission.

As Venisa explains, the Resistance needs to relocate some recruits off of Dantooine to the Colossus, so a few of the Aces are needed to help. As she is explaining this Kaz and Torra barge into Doza’s office and volunteer. Venisa also wants Hype to join the mission.

Before they all head out though, Venisa tells Yeager about her time with Tam on board the first order star destroyer, setting up Tam’s inner conflict, which plays out later on in this episode.

They all make the jump to Dantooine, and as they come out of hyperspace they start to raz kaz, because why not. They soon get attacked by a squadron of TIEs, but they wipe them out fairly easily.

Meanwhile, on Pyre’s ship, they hear of the attack and plan to send another with Tam and the Lietenent heading it up. Tam protests about attacking unarmed transports, but she’s quickly put in her place.

Back on Dantooine, the Resistance has the cadets and are escorting them off of the planet, but then the First Order attacks.

Tam targets Kaz, but then she gets blasted by Hugh. At the same time, one of the transports gets shot. Kaz gets targeted by the Lieutenant, but then Venisa blasts her into oblivion, so Tam becomes the new leader of the attack.

Tam verbally questions what she is doing as she returns to her ship. She is made the new squadron leader for her efforts.

On the colossus the Aces deal with the loss of the lone shuttle, while Captain Doza invites Venisa and Jade squadron to stay on board the Colossus, officially pledging the station to the Resistance.

This was a really fast paced episode of Resistance, and I loved it for that. It got right to the point, and embroiled our heroes and other cast members we’ve met this season in the Resistance versus First Order feud that makes this show interesting in the first place.

I appreciated the return of Venisa, and how she essentially got Doza to fully pledge himself and the Colossus to the Resistance, and it was also a cool nod to see Hugh again, providing Kaz with a tie to his past, and therefore this show’s own past.

I also really enjoyed how Tam was used in this episode, and the fact that she now fully realizes the errors of her ways. It’s definitely looking like she will have some sort of showdown with Rucklin, probably as he tries to advance his First Order career at the expense of Team Kaz. Trust me, she’ll be a good guy again before everything is said and done, even if it’s in sacrifice.

This episode showed why this show is a worthy entry and provider of Star Wars lore thanks to its direct focus on the Resistance versus the First Order plot. 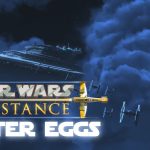