There aren’t many episode of Star Wars Resistance left, so “Rebuilding the Resistance” kept things humming along as it featured a plot fully dedicated to the Resistance’s war against the ever growing First Order.

It had a good amount of Easter eggs too, so head on down below to check out the breakdown.

Up first we get a call back to the very first episode of Resistance when it is revealed that Kaz’s New Republic wingman, Hugh Sion, has joined the Resistance and is in Venisa Doza’s squadron.

We then find out that her squadron has been tasked with escorting Resistance trainees off of Dantooine, a planet first mentioned in ANH.

Venisa then channels some The Last Jedi mantra when she refers to the spark and all that rah rah stuff Poe was slinging back on Crait.

This next one could be a reach on my part, but I’m going with it, and that is the revelation that Venisa’s squadron is called Jade Squadron, which could very well be a nod to Mara Jade, a now infamous legends character.

Venisa gives us another reference when she calls out to someone with the callsign of Echo 2, with Echo being the base name used for the Rebel base on Hoth. Or if you wanna get deep, Echo the clone.

Finally, and I cheated a bit on this one, but as the Resistance transports are leaving dantooine, you can see the same Jedi enclave temple that was featured in Knights of the Old Republic, which is a super deep cut for Resistance.

Let me know if I missed anything by leaving a comment below.

The Maker Embraces Baby Yoda In Set Pic From ‘The Mandalorian’ 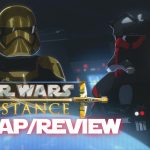