Star Wars Resistance returned with some Pirate shenanigans this week in, “The Mutiny”, which featured some awesome easter eggs, as well as a pretty fun little plot of rebellion.

Hey now fans of the Resistance, Matt Heywood here to recap and review Star Wars Resistance: The Mutiny, aka, S2E14.

The episode begins with Kragan meeting up with the Crimson Corsair to secure a shipment of B2 battledroids, which he secures after a terse negotiation with Mr. Idano.

Meanwhile, back on the Colossus, Synara is pleading with Doza to not keep the Pirates locked down, or they may do something stupid, go figure. Doza doesn’t adhere to her request, rather he calls for a security detail, which he takes with him to the Pirates hanger to confront Kragen, who has just returned from his illicit dealings. Synara is also suspicious of what Kragen may be up to, but he confirms he just went out to get food and supplies for everyone on the fueling station.

After he locks the pirates down again, Doza meets with Yeager and Neeku about some sort of plan, but as Kaz walks in on their meeting, they play it off as if they were just talking, because they don’t want clumsy Kaz in on the spying. Rather, they send him off to work on his ship, but he follows Neeku instead.

In the pirate hanger, Kragen asks Synara to go check on the market to see if the food is being doled out properly, so he clearly wants her out of the way due to her connection to Kaz and others on the Colossus.

Once she is gone he breaks out the B2’s, but they are busted, so he asks Neeku to fix them for him, claiming they’re for Doza to help with security.

While this is going down, Kaz and Synara link up at Aunt Z’s, and realize they’re both being kept in the dark about something, so they head off to the pirate hanger to see what Neeku could be up to.

Speaking of Neeku, he finishes his work on the B2’s and wants to finish a few updates for a B1 he found in the shipment of battledroids, but before he can finish, Kragen locks him up so he won’t tell Doza about the B2s he plans to use to take over the ship.

At this point Kragen rallies his pirates for a mutiny as Kaz and Synara look on from the shadows, but before they can rat him out, they too are locked up with Neeku.

Kragen’s attack begins, and his B2’s start locking down various sectors of the ship while he heads to Doza’s tower.

Meanwhile, Neeku’s B1 buddy breaks him and the others out because he reprogrammed him to do so, so they head out to save Doza, who is currently under heavy fire in his office alongside 4D and Yeager.

On their way to help Doza, Kaz, Neeku, and Synara get stopped, but the latter two save Kaz’s ass and they proceed to Doza’s office, which is empty at this point.

Synara knows where everyone is at, so she takes the others down to the pirate hanger by its airlock, where Kragen is getting ready to kill Doza and Yeager.

When all looks lost, Neeku sets B1 into action, and he proceeds to command all of the B2’s to stand down, and they listen because Neeku changed their programming to make the B1 their commander.

The day is saved, but Doza wants to punish the pirates for their mutiny. Synara asks him to just neuter them and let them go so they don’t waste anymore resources, and Doza reluctantly agrees.

As the pirates are banished, the good guys celebrate Miller Time by busting Kaz’s balls, because he’s Kaz.

This was a rather fun episode of Resistance, which all started with the awesome opening scene featuring a live action character Star Wars movie character in animated form. I just really appreciated brining Sidon into the mix, as well as the Clone Wars era droids.

They were both awesome ties back to the live action Skywalker Saga, which only helps to make this show feel like it is a  part of the same galaxy.

I also appreciated how Synara has more or less paid off on the character arch I predicted for her way back when we met her in Season 1. She may not have died to save Kaz, but she did cut ties with her pirate family to save her new family, so my vision mostly was paid off for her.

Finally, how can you not love how this episode mostly highlighted how everyone still thinks Kaz is a dope, and that they will go to great lengths to keep him out of the know, because of his klutziness. The final scene of Neeku busting his balls like a pro was just a perfect reminder that while he’s the show’s hero, he’s still a unique one thanks to his naiveté and dopiness.

"The Mutiny" is a really fun episode that also had cool references to the Ages of Republic and Resistance trilogies. 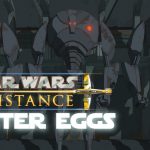