“Station to Station”, to me, is the best episode of Star Wars Resistance’s second and final season, and that’s because it finally fully focused on the First Order/Resistance plot line that got established when Tam joined the Order at the end of Season 1. This episode definitely sets up a pretty major turn for Tam before the series ends, and I just loved how she was utilized as a character to showcase that not everyone is cut out to be a First Order cog in the wheel.

The episode opens with Tam and Rucklan doing some First Order style chores when their lieutenant approaches them about a supply run mission. The two head out and discover that they’ve been tasked with picking up some goods from the Titan, which is an identical looking fuel station to the Colossus.

The two land on the station, and as they’re walking to the supply depot, Tam thinks she hears a familiar voice, and that voice belongs to Kaz.

It turns out she isn’t hearing things, because Kaz, Neeku, and CB have snuck on board to steal a trans binary deflector for the Colossus, or the station will basically turn into a microwave.

Kaz and Neck head off to the Engineering level, but Kaz is sidetracked when he’s tasked with brining General Hux to his meeting room.

As Kaz and Hux get off an elevator, Pyre shows up, which causes Kaz’s butthole to clench up a bit, but he avoids being seen.

Meanwhile, Neeku starts to get questioned by some Troopers, but luckily Kaz shows up in time and talks their way out of any trouble.

The two sneak off to engineering to turn off a few sensors so they can steal the deflector.

While walking through the station, Tam hears some troopers talking about two odd techs, and they mention one is a Nikto, so she immediately knows her previous hunch was right, and that Kaz and Neeku are on the Titan. She heads off to look for them.

Unfortunately, Rucklin rats them out to security and locks them in the room. Kaz gets the deflector free, but they can’t get out of the room, so they appear to be hosed until Tam spots them on a video feed.

She learns why they need the deflector, so she releases the door lock for them so they can escape. She also misleads some troopers who are looking for Kaz and Neeku, so she clearly is having a change of heart on her former friends.

Kaz and Neeku get spotted by Pyre and shot at, but luckily First Order troopers are worse shots than their predecessors, because the good guys make it into a hanger for their final escape.

After a fun little action sequence that sees Kaz and Neeku hopping across containers while CB battles other ball droids, the good guys get away just in the nick of time.

As the episode closes Pyre reaches out to Agent Tierney and she has a plan to keep using Tam to get to the Colossus.

What a great episode of Resistance, in fact, it’s this type of episode that I’ve been looking for all season long. It gave me everything I’ve been hoping for in regards to the First Order and Resistance plot line that got established when Tam joined the Order at the end of Season 1.

We got to see how Tam would react if her old friends were in trouble, and as expected, she did the right thing. This episode made it clearer than ever that Tam, while still upset and confused over what Kaz did, ultimately will go back to the good guys when things get real.

I do appreciate how the writers don’t make her choices easy, because you could tell that she questioned why she was helping Kaz and Neeku, but thanks to her having a good natured soul, she can’t help but do the right thing, which shows she’ll be able to make a heroic choice if it comes down to it before the series ends.

I also rather enjoyed Kaz being Kaz, and his voice impressions to throw off the First Order were hilarious, and so Kaz-like. His doofusness is undeniable, but its what makes me enjoy him so much. He can come off as a complete bozo, but  he always gets the hard jobs done.

"Station to Station" is the type of episode I've been wanting all season long, which is due to its full on focus of Tam's plight and how she's pulled between her former friends and the allure of being a pilot in the First Order. 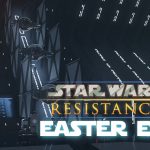