Star Wars Resistance returned this week with another self-contained plot type of episode, but this time around I found much more enjoyment in the offerings of “Kaz’s Curse”.

Why you may ask? The answer awaits below!

The episode starts with Kaz cleaning house at Star Wars version of craps, but due to his luck, a pirate puts a curse on him by smearing alien spittle on his head.

Kaz thinks nothing of it, so he and Neeku head out to get some food, but curiously, as Kaz walks the ship’s lights flicker and even explode, so maybe the curse is real after all.

When Kaz and Neeku hit the market, more odd things start to happen around Kaz such as the food running out, and a cart of boxes crashing into him, so he starts to buy into being cursed.

At this time Kaz gets called to the hanger with a few other aces because the Colossus is heading into an asteroid field in Guavian Death Gang territory, so Yeager wants the aces to scout ahead.

Kaz, Hype, and Torra head out to scout, but Kaz gets separated as his ship starts to experience all sorts of malfunctions. While his seat has his face pressed against the canopy a Guavian spots him, and flies off.

Kaz also sees him, and alerts Hype and Torra, but due to his curse, Kaz ends up losing the mark, so they’ve been spotted.

The Aces head back to the colossus defeated, with Kaz literally crashing his way back.

Everyone is disappointed in Kaz for not scrambling the Guavian, so Neeku convinces Kaz to try and get the pirates to remove his curse.

Kaz reluctantly agrees, so he and neeku visit the pirates, but all those jerks do is double curse him with another layer of saliva, so Kaz heads over to Meeka’s tent.

Meeka gives Kaz a talisman to help him break the curse, but she mostly tells him that a curse’s power is truly regulated by how much one believes in it, which will come in hand shortly for Mr. Kaz-tastrophe.

At this point other Guavians have showed up and start blasting the Colossus. They demand 1 million credits, so Doza tells them to pound crait salt, and he sends out the Aces.

As Kaz runs to his ship he drops his talisman, which he already believes helps him.

He catches up to the Aces and starts to try to help, but his targeting computer fails. He looks for the talisman but it’s gone, so he panics, but then he gets his act together and punches out his computer, which makes it work again.

He then goes full on Ace pilot and takes out  multiple targets while saving his wingmen. Thanks to Kaz the Colossus makes it out of the asteroid field and hits hyperspace.

Kaz has his groove back!

You know, I was a little worried that this episode would be another forgettable, stand alone plot type of deal, but in the end I came away enjoying it more than I thought.

I credit this to the arc Kaz follows, and how it played into his natural klutzy-ness. We know Kaz has the makings of a Star Wars hero, but his goofiness always gets in his way, so I like that this episode allowed him to grow from his own failures and realize that he isn’t just a doofus that gets lucky.

He’s a damn good pilot, and when he doesn’t let himself get in his own way, he can do some really special things, which is why I ended up enjoying this episode so much.

It may still  have skipped out on the plot content that I want, which is the whole First Order versus the Resistance, but at least it offered some legit growth for our buddy Kaz.

While this is yet another standalone plot type of episode, it at least offered a bit of character growth for Kaz, so I appreciated his moment to shine. 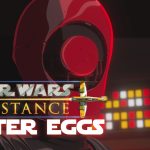