In the latest episode of Star Wars Resistance, Synara pays off for the pirates, but she may be having a change of heart. Overall, the episode was pretty good, and it added more layers to the overarching narrative of Kaz’s mission, and the First Order’s desire to control the Colossus. Head on down below to check out the full recap and review video, or you can just read its script.

The episode begins with Yeager’s team tasked with fixing the targeting computer for the Colossus’s turbo canons, which have been getting extra work every since Synara showed up and started leaking secrets to the pirates, but more on that later.

Kaz and Tam head out in search of the parts the team needs to fix the computer, which leads them to Synara, who has taken up residence with scavengers who pick the bottom of the ocean for parts to sell on the colossus. Synara has the part they need, so she gives it to Tam. Although, she guess that the part must be for the station’s defenses, so she does some spying and sees that Yeager is talking to Doza in the tower, which leads her to believe that Team Fireball is fixing the stations turbo cannons.

To confirm her suspicion she drops in on Team Fireball as they complete their fixes, so she does confirm that the targeting computer is jacked up.

Tam hurries her away, because they still think she’s just an innocent, so they don’t want to clue her in as to what’s up, but she already knows unbeknownst to the Fireball crew.

Now that Synara knows that the stations defenses are down, and that the Aces are off on another mission, she contacts Kragan and tells him to attack.

And attack he does with his pirates. They blast up the station pretty good, because all of its defenses are down, so Yeager and Kaz rush to get the fixed targeting module installed, while Tam heads off to help Synara, because she again thinks she’s a good gal getting roughed up by pirates.

Kaz and Yeager eventually get the module installed, which forces the pirates to call of their attack. Tam makes an impression on Synara after coming to help her, and it seems as if Synara is starting to feel bad about betraying Tam and those on the Colossus she’s gotten to know.

The episode ends with Doza contacting Commander Pyre from the First Order to ask him for help in defending pirate attacks, so the First Order’s plans to gain a foothold on the Colossus using pirates has seemingly paid off.

This was just another fun Star Wars Resistance episode. It had a great pace, and did a fine job at continuing to build upon the show’s overarching narrative of Kaz’s spy mission, as well as those tied to the Colossus inhabitants themselves.

I really appreciated how Synara’s thread was handled, because it showed how shady of a character she is, but it also hinted, that like most people, she may overcome her bad self after seeing the benefits of having good friends and people that really do care about you. I think her bond with Tam will be a key one moving forward, so I’m interested to see how her thread plays out.

I also really liked how the end tied this episode and all of the rest together by revealing that the First Order’s pirate strategy has paid off thanks to Synara’s spying, and that it has gotten them the foot in the door they’ve been searching for since the pilot.

This episode also had a ton of Star Wars easter eggs and references, so it like most of this season’s run, was a fun little animated adventure that provided its own little story, while also adding to the season’s main narrative arcs.

Thanks for watching, I’m Matt Heywood signing off for StarWarsTime.net, because there’s always time for Star Wars Time! 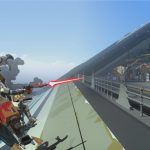 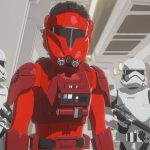