The Colossus is underwater and it is looking like our heroes may be as well. The station is under full First Order control now and all Resistance sympathizers or First Order detractors are being imprisoned.

As Agent Tierney continues to work on Tam, Kaz, Neeku, Kel, Aayla, and CB-23 are all trying to find a way to help Yeager escape from confinement. The episode is mostly centered around Kaz and CB running away from First Order troopers, but the end of the episode provides us with a very familiar scene from The Force Awakens, which sets up Kaz, and the audience, for a climactic final episode.

Make sure to check out our Easter Eggs and Franchise References piece as well! Let’s get into the review.

“Hey now Team Fireball, Matt Heywood here to recap and review the latest episode of Star Wars Resistance, which is titled, No Escape Part 1, aka, S1E20!

The episode begins with Captain Doza getting arrested for insubordination by Commander Pyre, who cheekily reminds him that he willingly gave over control of the Colossus to the First Order.

Meanwhile, Kaz, Neeku, and the other on the run cast members plot what to do next. Kaz suggest trying to contact his people on Hosnian Prime, but Neeku suggests getting some weapons to help save other Colossus inhabitants.

While this is going on, Agent Tierney continues to work over Tam by feeding her lavish meals, and showing her a holo-tape of Yeager under arrest for being a Resistance spy.

After seeing her father get arrested, Tam sends Mr. Buggles to go look for Kaz, who is currently underwater again being hunted down by First Order Troopers.

Kaz eventually gets saved by Neeku who is in the Colossus’ master control center, so he pressurizes the underwater corridors to help Kaz get away from his attackers.

Kaz makes his way to Flix and Orka’s to look for weapons, but they tell him they have none. On his way out Mr. Buggles finds Kaz, so he now knows that Torra is looking for him.

Around the same time, Neeku informs Kaz that the Colossus is also a space station and that it has a hyperdrive, which provides for some serious foreshadowing.

Tam and Tierney continue to talk about the Resistance spies when they run into Yeager, who tries to scream to her that she’s being played, but she is seemingly too far controlled by Tierney, because she just yells back at him about his transgressions.

Kaz and Torra eventually link up, but they run into BB-9e who gets into a brawl with CB, but CB wins, so they all move on.

Tierney finally makes her pitch for Tam to join the First Order as a pilot, but we don’t get to see if she accepts or not.

The episode ends with Kaz and Torra rolling up on a holo-stream of General Hux’s Starkiller Base speech, which ends with Kaz realizing that his home system has been destroyed and that his friends and family are no more.

This episode of Star Wars Resistance was odd, because it definitely excelled at progressing the plot even closer to the season one finale, but at the same time, it just felt like nothing major really happened.

I mean outside of the show finally catching up to the events of The Force Awakens and Doza getting arrested, nothing really happened in No Way Out Part 1.

With that being said, and this will sound ridiculous, but plenty did happen, because by the time this episode ends, as they say, all of the Star Wars Resistance chips are on the table.

Kaz is desperate to escape, and has just witnessed his homeworld being obliterated. Yeager and Doza are locked up. Tam is basically ready to join the First Order, and pretty much all hope has been lost by Colossus citizens.

Things couldn’t be any dire, which to me is the perfect way to round this series out next week, which will hopefully provide some sort of hope for Team Fireball moving forward.

Again, the episode as a whole doesn’t really stand out, but for what it accomplishes, which is getting the first season ready to end on hopefully a bang of some sort, it does manage to satisfy.

I just can’t wait to see how it all ends next week based on where this episode leaves all of the pieces in play.

May the Force be with you, always.”

While this penultimate episode didn't really have much going on, it still pushed the season's main plot arch to the brink of its climax, so it was serviceable for the type of episode that it was meant to be. 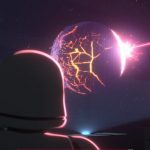