The latest episode of Star Wars Resistance — “The New Trooper” — offered up five items of interest when it comes to our weekly Easter egg and Star Wars franchise breakdown video series, but I wouldn’t call any of them overly awesome. In fact, most were just references to moments from other Star Wars properties, and one I take many liberties with, so this episode required a bit of work and creativity to generate a decent list of items that only hardcore Star Wars fans would understand.

The main plot, or at least one of its threads is essentially a callback to a trick Luke and Han used in A New Hope, which offers up the juiciest of references in this episode. I also contend that we get to see BB-9E for the first time, or at least a relative, if anything else, there’s a First Order droid who has an identical temperament and bullshit meter to BB-9E from TLJ.

Head on down below to check out the five Easter eggs and references for “The New Trooper”. 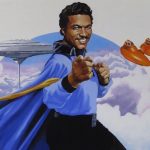 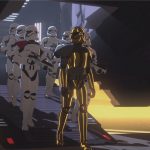