Star Wars Resistance continued to hammer on its overarching First Order plot with its latest episode, “The First Order Occupation”, so naturally it was a solid one to watch.

It mostly picks up right after the events of the last episode, so the First Order is now fully occupying the Colossus. The plot focused mostly on Synara needing to get off the Colossus due to her being the pirate spy, and it featured a few fun Easter eggs to spot or hear. If anything else, it definitely setup the First Order’s eventual hostile takeover of the station, and provided an eerie look at life under the First Order’s protection.

“Hey now Team Fireball, Matt Heywood here from the Star Wars Time Show to recap and review the latest episode of Star Wars Resistance, which is titled, The First Order Occupation, aka, S1E15.

The episode opens and the impact of the First Order’s security detail on the Colossus is being felt by everyone. In particular, Synara, who is trying to get herself off the station after the events of the last episode in which the First Order betrayed her Pirate leader, and put her at risk for being caught as a Pirate spy.

Kaz is very uneasy about the First Order presence, but others, including Tham, seem to appreciate their protection at first. He intervenes in a First Order shakedown, which in turn causes the Troopers to want to question him about possibly being the pirate spy. This also tips him off about their search, so he will ultimately feel the need to warn Synara.

Kaz confronts Yeager about wanting to contact the Resistance about the occupation, but Yeager talks him down. The First Order shows up to question Kaz because they saw him with Synara on security footage during the night of Torra’s kidnapping. Before they can go too far with their questioning, they get word of Synara’s location, so they head out to look for her.

Kaz also heads down to salvaging to warn her, and in the process he hears her talking to Kragen, but he already knows she’s a pirate spy, but he believes she’s still a good person, so he proceeds to help her by letting her know in a very Kai-Like way that he knows she’s a pirate and that she needs to get off the Colossus.

He tucks her into a cargo crate and proceeds to wheel her off to a ship that is getting ready to leave for Takodana. He gets her there, tries and fails at expressing his true feelings for Synara, and then breaks her on board with BB-8’s help. Although, the act gets him spotted by the First Order, so they chase after him and BB-8 while Synara looks concerned for their well being.

Kaz and BB-8 get cornered, but before the First Order can arrest them, Synara saves the day with two timely wrenches to the head.

The three turn to Neeku for help, yes Neeku, and after trying to explain to him that they’re trying to sneak Synara off the station, he agrees to help by mentioning the location of underwater escape pods.

At this same time the First Order catches up to them, so Neeku bravely provides a distraction with BB-8 so Kaz and Synara can head for the pods.

They make it to the pod bay after an extremely awkward elevator ride in which you can feel Kaz’s sexual tension towards Synara, who clearly doesn’t feel the same way about him.

Anyway, they make it to the escape pods and Synara jettisons herself off the Colossus.

Kaz, Neeku and BB make it back to Yeager’s shop without being caught or identified, so their scheme worked this time.

As the episode ends Synara gets picked up by Kragen, but you can tell that she already misses her new friends from the Colossus.

Like the last episode, I appreciated the fact that this episode wasted no time with side plots or random self contained stories, and opted to stay full go with the First Order Occupation plot. This really allowed Kaz to slip further into his Resistance spy and overall good Star Wars hero guy role, and he performed admirably.

I’ve really come to enjoy Kaz and his klutzy style, and appreciate that he’s an imperfect Star Wars hero lead. His relationship with Synara is becoming more and more intertwined, and even though she’s gone, I do not think that she and Kaz will never cross paths again. In fact, based on the ending of this episode, I do think she’ll find her way back to her Colossus friends and ultimately join them, or sacrifice herself to save them, so don’t be surprised if she pops up again when you think all hope is lost for Team Fireball.

I also appreciated how this episode quickly showed how an occupying force can go from being considered heroes to bullies. At the start, you could feel that most aboard the Colossus loved the First Order presence, including the always cynical Tham. But by the end, you could see, just through background scenes, or secondary dialogue, how imposing the First Order is already becoming. They’re arresting people for curfew, they’re taking away floor buffers, because you know, floor buffers can be deadly. They’re just acting like assholes, which we know them to be, but so far most of the Galaxy doesn’t at this point, which is why Kaz is spying for the Resistance in the first place.

So overall this was a solid episode that definitely started closing some Resistance narratives, while also setting up a few new ones that will surly carry us into a hopefully shocking cliffhanger style ending for the show’s first season.

Thanks for watching, I’m Matt Heywood for the Star Wars Time Show podcast, where we always find time for Star Wars Time. May the Force be with you, always.”

"The First Order Occupation" episode zeroed in on the First Order plot to take over the Colossus, so naturally, this type of episode is going to rank high on our list. 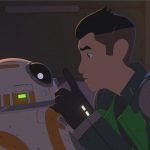 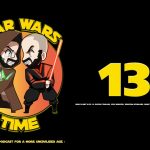