Star Wars Resistance: Dangerous Business got the season’s main plot arc back on track with a solid little nod towards the First Order plot that Kaz has been charged to investigate by General Leia. Although, it appeared as if this would be another self-contained episode like last week’s mid-season return episode, but thankfully a few covers were lifted by the end, and we got a sneak peek at what the First Order is up to, and how they keep using nefarious actors to do their bidding in secret.

The episode opens with the Fireball team being blown away by the fact that Kaz is doing surprise maintenance on the Fireball so Tham could take it for a spin, isn’t he just becoming the most thoughtful of clumsy heroes!

Anyway, to pay for the parts he used to try and fix the Fireball, spoiler alert, his fixes weren’t up to snuff, he has to man Acquisitions for Flix and Orka so they can go on a holiday with their pit droid.

While holding down the shop a shady character comes in looking for a phase connector by the name of Teraj Kee. He gets pissed when Kaz won’t sell him the only one in the store because it’s been reserved for a mining guild, but he buys  a bunch of parts anyway, and demands Kaz delivers them to his shipping container.

Kaz and BB-8 suspect Teroj is shady, but Kaz heads to his location anyway to see if he can gain any insights that may be valuable to the Resistance. Without fail, Kaz is trapped in a container by Teroj, so he commands his underling to dispose of the canister with Kaz inside so he can go rob Acquisitions.

Teroj heads to the store, but BB-8 puts up one helluva fight, complete with a rope swing to try and stop him, but Kee eventually overpowers him and makes off with the phase connector.

Kaz uses a little of his burgeoning mechanic’s skills to get out of the crate just in the knick of time, so he heads off to track down Teroj, who he finds boarding his ship. It’s at this moment that Kaz also discovers that Teroj is working with the First Order, and he stole the device for their use.

Kaz, with the help of Bitey, an unsung hero of this episode, bring down Kee’s ship so they can’t make off with the phase connector while they escape in an escape pod to head back to the Colossus.

Filx and Orka return and thank Kaz for his help, and they inform him that phase connectors are used for mining asteroids and other celestial bodies, so Kaz naturally finds this interesting and plans to inform the Resistance about the First Order’s latest shady plot.

Unlike the last episode, Dangerous Business injected a bit of the overarching First Order plot back into this episode, which was appreciated after getting a mostly throw away episode in Bibo last week. Although, this episode didn’t reveal its hand until the last act, but I do believe we got a nice wrinkle to Kaz’s main mission in the form of him foiling a plot of the First Order’s to get another tool to undoubtedly use for its war machine. In fact, I believe they wanted this phase connector to either help finish the construction of Starkiller Base, or to keep mining for materials used in blasters and other weaponry. So I did enjoy getting a valuable lore nugget out of this episode.

I also really enjoyed how this was mostly a Kaz and BB-8 focused episode. Like the last one, this episode also showed how far Kaz has come since first boarding the Colossus. The fact that he was doing mechanic work on his own accord to actually give Tham a chance to fly the Fireball speaks volumes about his personality, and again, with BB-8’s and Bitey’s help, Kaz foiled a major First Order plot by himself, so he is really starting to grow into a full blown Star Wars hero, albeit a clumsy one, but one with a good heart and intentions, so he’s easy to root for. 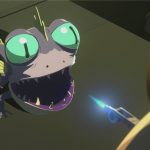