Season 1 of Star Wars Resistance is coming to a close this Sunday, March 17th, and we now have a quick preview of No Escape Part 2.

The preview is only a minute long, but it gives a very interesting look at the situation on the Colossus after the end of No Escape Part 1. It looks like Captain Doza and Yeager have somehow escaped the clutches of the First Order and are in communication with Kaz as he is running from a set of troopers.

Yeager is telling Kaz that Agent Tierney and Commander Pyre are taking Tam off the station. Kaz is imploring Yeager to do something about it, but it looks like it might be too late as the trailer closes out with Tierney, Pyre, and Tam walking out onto a launch dock where a First Order transport is landing. 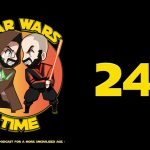