We were very fortunate to have Nick Gillard, Stunt Coordinator for Star Wars Episodes I – III, on the Star Wars Time Show, and during our interview with Nick, he revealed that the ‘High Ground’ scene at the end of Revenge of the Sith was supposed to be much different than what we saw in the final version of the film. Check it out:

The “high ground” has become an everlasting meme in the Star Wars community, but according to Mr. Gillard, the scene could have been much more visceral than it was. As he described it, Anakin would have been choking the life out of Obi-Wan and goes to strike the final blow, but before Anakin could cut his head off, Kenobi force pulls his saber to himself and cuts off Anakin’s arms and legs in one swift motion. Effectively saving his own life and severing all of Anakin’s limbs.

He also revealed that the lava fight leading up to the high ground moment “happened 3 minutes before they did it,” so clearly that was no in the script or planned out that way.

In my opinion, this would have been much cooler to see on screen, but alas, George has different plans for that scene. Still, it is awesome to hear behind the scenes stories like that from one of the most important players in the prequel trilogy! 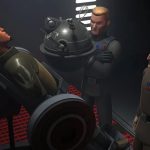