EA and Respawn will finally being pulling back the covers on Star Wars Jedi: Fallen Order, which is an actual Star Wars video game being developed by the Titanfall creators that doesn’t have the word Battlefront in it. There will be a panel at Star Wars Celebration 2019 in Chicago on Saturday April 13 for the game, and it will feature never-before-seen footage from the game, as well as new details on its development.

In addition to Star Wars Jedi: Fallen Order, Star Wars: Galaxy of Heroes, Star Wars Pinball, and Star Wars: Old Republic will also be at the show. It sounds like there will be stations on the floor for fans to play and talk with developers.

Stay tuned for more details as they release.

Gamers will meet a Padawan who survived Order 66 and explore the galaxy in the time after the fall of the Jedi Order. The game is set to release this fall for multiple platforms.

Here are the Key Facts You Need to Know about Star Wars: Galaxy’s Edge 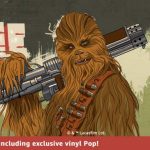