The Star Wars universe is expanding in many different ways with the opening of Galaxy’s Edge in Disney World and Disneyland. Not only will users be able to experience an authentic Star Wars experience via the new park expansion, but they will also be treated to a host of new lore around Batuu, the planet on which the park is based.

Galaxy’s Edge: Black Spire is the first novel to introduce us to the rich history and lore that is associated with Batuu and the Black Spire Outpost. The novel will focus on Vi Moradi, General Leia Organa’s top spy as she seeks out refuge for the Resistance after a crushing defeat at the hands of the First Order.

This hasn’t been confirmed by any official outlet yet, but based on the description of the novel, and the significance of Batuu to Episode IX, this will likely be a pre-curosr story that could give lead in context to Episode IX. Basically this is a must read for all Star Wars fans. 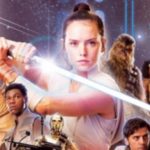