EA and Capital Games have posted a trailer for the next big event coming to Star Wars: Galaxy of Heroes, which is The Scourge of the Old Republic. This event will give players the chance to earn Darth Revan as a playable character, but he’ll require a ton of grinding, and cash to do so if you want him during this first pass.

Unlike Jedi Revan, Darth Revan will require five new Old Repulic characters to take down, and the challenge will be no joke. The required characters are Bastila Shan (Fallen), Canderous Ordo, Carth Onasi, Juhani, and a reworked HK‌-47. All of the characters are currently farmable, but if you haven’t been doing so for the past few months, then you have no shot of getting them all to seven star before the event begins without a heavy investment of real cash. Although, HK should be at seven star for nearly everyone, because he’s been around since the game’s inception, but the others will require grinding and cash if you aren’t a gem generator in the game’s Arena modes.

The event will be hitting the game shortly, so check out what Darth Revan’s powers will look like above, and get to farming those Old Republic toons! 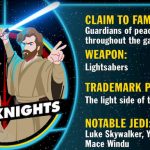