Star Wars: Galaxy of Heroes is getting a new competitive mode soon, and it’s centered around the Grand Arena. The new mode is Grand Arena Championship, and it will offer various reward tiers that players can work themselves into through competing against other similarly ranked players.

In GAC, players will be placed in tiers based on their Championship Score, which is earned through playing the game and mode. The CS will determine what League you play in, which in turn determines the type of rewards you can earn. The highest League is Kyber, which naturally will put out the best swag.

If you read the video’s comments though, you’ll see that the community isn’t too trusting of this new mode, which many are arguing is for whales only, as in big spenders. If anything else, the comments are fun to read if you play the game, so check them out after watching the video above. 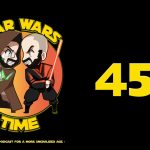