According to the dude over at Bespin Bulletin, Bryce Dallas Howard will be directing more Star Wars after yet another successful job on The Book of Boba Fett S1E5. She is set to helm another episode of The Mandalorian for its third season, which is currently shooting now out in L.A.

Bryce Dallas Howard has previously directed one episode in each of The Mandalorian’s seasons. In the first season she helmed Sanctuary, the episode where Din meets Cara Dune. In Season 2, Bryce directed The Heiress, which is the episode in which Bo-Katan, Koska Reeves, and Axe Woves jet-packed in to help Din out after he was double-crossed by some squid-faces.

Fans have universally praised Howard’s work on her Star Wars projects, so this news shouldn’t shock anyone. Just google Bryce Dallas Howard and The Book of Boba Fett to see the massive praise she received for this week’s episode of Lord Fett’s series. She’s becoming a rock star in that far away galaxy, so this is great news indeed.

Nick and I will talk more about this news in next week’s episode of the SWTS, so don’t forget to tune into the Star Wars Time Show on a weekly basis via our podcast platforms or via YouTube if you prefer the livestream angle. 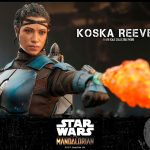