According to Fanthatracks.com, a UK cinema chain has been sent the holy Star Wars Grail, which is the teaser trailer for Star Wars: Episode IX.

Their sources told them the following:

A MAJOR UK CINEMA CHAIN HAS RECEIVED A DIGITAL CINEMA PACKAGE (DCP) FROM DISNEY THIS MORNING CALLED TT1-SW9, (TEASER TRAILER 1 STAR WARS 9). IT’S ENCRYPTED WITH A KDM (KEY DELIVERY MESSAGE) SO THEY CAN’T VIEW THE CONTENTS UNTIL THEY GET THE KEY.

NO NEWS ON WHEN THEY’LL GET THE KEY, BUT THEY HAD THE ALADDIN TRAILER DCP FOR TWO WEEKS BEFORE IT CAME OUT ON MONDAY…THEREFORE, FRIDAY MIGHT BE THE DAY, BUT THAT’S PURE SPECULATION.

Of course this should be treated as speculation and rumor, but the details provided definitely sound legit. I still think the trailer may wait for Star Wars Celebration, but I wouldn’t mind if it dropped before.

Stay tuned for all the eventual details as they become available. 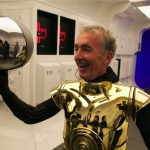