The end is near Star Wars fans. The time for Episode IX is quickly approaching, even more so now that JJ Abrams has announced the end of principal photography via his Twitter.

John Boyega also added in his thoughts on the Episode IX process:

As a tried and true Star Wars fan, I have a flurry of mixed emotions right now. I am unbelievably excited because I know the movie is one step closer to being in the can, but I also have a bittersweet feeling knowing that this movie could well be the end of the core Skywalker saga and the end of so many fantastic new characters like Kylo Ren, Rey, Poe, and Finn.

Nevertheless, this is a great moment for the actors, crew, and everyone close to the production itself, as well as the Star Wars community as a whole.

Star Wars: Episode IX is set to release almost 10 months to the day from today, February 15th, so get ready people, the end is near. 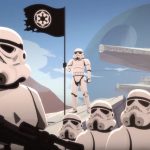