Thanks to a new post on StarWarsLeaks, we have what may be an early draft of Colin Trevorrow’s Star Wars Episode IX treatment, which was supposedly called Duel of the Fates.

I went ahead and broke down the main points in the video below, so tune in to see what this supposed version of Episode IX would’ve been like.

This one comes from StarWarsLeaks and supposedly deals with a summary of the Episode 9 script as written by Colin Trevorrow and Derek Connoly, dated 12.16.16, one week prior to Carrie Fisher’s death.

Some Hollywood dude named Robert Meyer Burnett apparently got a hold of it and summarized its main plot points, so let’s go ahead and check some of them out.

Up first the wildly different crawl.

The iron grip of the FIRST ORDER has spread to the farthest reaches of the galaxy. Only a few scattered planets remain unoccupied. Traitorous acts are punishable by death.

Led by GENERAL LEIA ORGANA, the Resistance has planned a secret mission to prevent their annihilation and forge a path to freedom…

The post then went on to summarize core plot points about the film’s main acts.

In this version, the film would open on Kuat with BB-8 and Rose infiltrating the Kuat Moon where the Order builds their ships.

Finn and Poe are there as well, and Rey eventually shows up too. R2 and 3PO or MIA.

They all plan to blow the ring to bits, but it goes wrong and the Order contains it.

Apparently Rey is disguised as a tusked raider and has a double bladed lightsaber fashioned out of her staff and Luke’s saber.

The good guys all battle the bad guys and they end up stealing a Star Destroyer!

The Knights of Ren show up at Kuat and kill the Admiral for allowing the Resistance to steal a destroyer. Then the action cuts to Coruscant.

Apparently, it’s no longer a vibrant city and is occupied by the Order, which has a palace there now. Citizens are basically scavengers and Hux is now Chancellor.

Hux and a Commander Selleck meet with alien warlords, meaning the Order has allies and they’re aware of Rey being the last jedi. They also want to know where the hell Kylo is at.

Now things transition to Mustafar where kylo is alone and he’s being haunted by Luke’s ghost.

Luke tells him, “This is where the dark path leads; an empty tomb.” Kylo (retort): “Where did your path lead?”

Luke is trying to get him to turn back to Leia, but he presses on and finds a sith holocron in Vader’s castle, which reveals a hologram of Palpatine. The recording was for Vader as a contingency if Luke killed the Emperor. Vader was supposed to take Luke to the Remnicore system to see Tor Vallum, the Master of Sith.

Things transition to the Resistance base on Koa-Alaf and Leia can feel what is happening to Ben. The Kuat raid team arrives, complete with a Destroyer to everyone’s surprise.

Apparently Rey confides in Finn that she doesn’t have what it takes to be a Jedi, and he asks her about her Kylo connection, to which she replies she’s having nightmares.

Finn tells her to shut him out and that he can’t change, but Rey tells him Finn taught her that anyone can change.

Rey also learns through the Jedi text that there’s a comm beacon under the Jedi temple on Coruscant, which can send a signal to 50 planets and can’t be blocked by the Order.

Now we get to see Rey train with Ghost Luke, so he’s pushing her to get stronger, and Kylo to let Ben back out.

Kylo makes it back to Coruscant with a damaged face from the holocron, and apparently some Mando armor is melted down and grafted onto his face?

Things cut back to Rey and Luke who are still training and arguing the merits of the light and dark sides of the Force. Rey basically doesn’t want to be a Jedi because she is a no one, but Luke presses her on how the Force is speaking to her.

The scene cuts back to Kylo and Hux with Kylo telling him he’s found power that makes blowing planets up insignificant, and as he heads off he tells Hux to wipe out the Resistance and he will deal with the girl.

Now things start to head towards the climax, so two resistance teams are dispatched to carry out the missions.

Team A, which is Rose, Finn, R2, and 3PO head to coruscant for the beacon, while Team B, which is Rey, Poe, and Chewie, go to a planet to find someone to help rey figure out what she needs to do.

Meanwhile, Kylo goes to the Sith planet Remnicore, but before he does so he chucks vader’s helmet off a balcony and yells at him for allowing love to cloud his judgment.

Leia remains at the Resistance base to oversee the operations, and her and Rey talk before Rey leaves, with Rey telling her that Kylo still has good in him, but Leia is skeptical, but she does double down on how Rey is her own person and that the Force chose her.

And now for the finale.

The Order tracks down the Resistance base but they escape.

Team A infiltrates the Jedi temple and turns on the beacon, so the signal gets out, but the Order cuts it off shortly after. Team A flees to the underbelly of Coruscant.

Team B is being pursued by the Knights of Ren but eventually reach Bonadan.

On Bonandan, Poe takes Rey to a Seer who pulls a star chart out of Rey’s memories and then the Knights show up but Rey beats them.

Both Rey and Kylo head to Mortis, while Leia asks Lando to rally the Smugglers.

Rose gets captured by the First Order and is tortured, but escapes.

Finn and the two droids start a revolt on Coruscant.

Leia brings the rest of the Resistance to Coruscant for an epic space and ground battle and chewy flies an x-wing!

Rey and Kylo do battle on Mortis and it’s revealed that Kylo killed Rey’s parents at the behest of Snoke. Towards the end Luke, Obi-Wan and Yoda show up as Force ghosts to save Ben, but they can’t and his light is extinguished.

SO there you have it, if there’s any validity to what this Robert Meyer Burnett guy was reading, then we got a wildly different film.

Obviously, Carrie’s passing would have required massive changes to this supposed draft too, but it also appears that Colin stuck with Rian’s take on Rey’s backstory and left her as just Rey, which I personally dig.

I still think if JJ was allowed to do all 3 movies we would’ve gotten the best possible and most cohesive trilogy, but the stories have been written and we got what we got.

Let us know what you think about this rumored Episode 9 script by leaving a comment below. 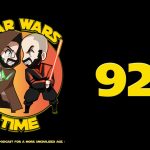