It appears that Hasbro is shifting to new packaging for its Star Wars Black Series line of figures, which features highly detailed and poseable 6″ scale collectibles. Thanks to Exclu Magazine, we now have a bunch of new glamour shots to show off the packaging, which looks very similar to what Hasbro uses for its Marvel Legends line.

What’s even cooler about the new packaging is the fact that we got some updated glamour shots of Zeb from Star Wars Rebels, who is the only member of the Phoenix Squadron to not have a figure yet, so I’m glad he’s getting his due.

The word is that most of these will be available for pre-order later today on the usual sites that sell Hasbro figures, so stay tuned for that drop. If I were a betting man, this will be the landing page for new Star Wars pre-orders on Entertainment Earth, so keep that link handy.

UPDATE – Exclu sent over even more images and it looks like all of Phoenix squadron is getting re-released!

Star Wars: Tales From The Galaxy’s Edge VR Experience Will Expand the Age of Resistance Mythos 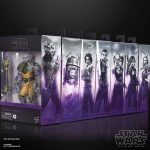