DICE and EA have put out a new developer diary style video for the next free community update coming to Star Wars Battlefront 2, which is The Battle on Scarif. The update will go live tomorrow, April 29.

Details can be found below, or you can head over to the community page and read the thread.

On April 29, we’re bringing the Age of Rebellion to Supremacy and Instant Action, introducing the high-agency battles on Hoth, Tatooine, Yavin 4, Death Star II, and – the highly requested location from Star Wars Battlefront (2015) inspired by Rogue One: A Star Wars Story – the tropical world of Scarif.

Given the massive difference in military might between the Rebels and the Empire – and Death Star IIand Scarif not lending themselves to capital ships narratively – the battles in Age of Rebellion Supremacy will be fought throughout the ground phase exclusively. In return, we’re enabling the ability to pilot starfighters on a selection of the Age of Rebellion Supremacy locations.

Scarif and Crait are both joining the Heroes and Villains game modes and Co-Op will see the addition of the MC85 Star Cruiser, First Order Star Destroyer, and Scarif.

We’re bringing the experience you get in Co-Op to offline solo play, too! Instead of teaming up with other players online, this version will let you play exclusively with and against AI on all Co-Op enabled locations. This new way to play will be included as an option in Instant Action.

Furthermore, we’ve heard you ask for more appearances. As our way of saying thank you, we’re giving all players three new ones inspired by the concluding chapter of the Skywalker saga: Rey wielding her yellow lightsaber, Kylo Ren wearing his reforged mask with the hood up, and Emperor Palpatine binding it all together with his latest, menacing set of robes. This will also be Palpatine’s default appearance in sequel era Supremacy, Co-Op, and Instant Action, as we enable him for those along with Chewbacca on the light side.

We have a couple of special rewards for those of you who love a challenge as well! After being gravely defeated by Obi-Wan Kenobi, Darth Maul regained his mobility with a pair of mechanical legs and was fueled by his hatred towards the Jedi master. Eliminate 5,000 enemies as Darth Maul to get his Old Master appearance.

Rey’s hooded look, on the other hand, will be awarded to anyone uncovering the mystery on Takodana . . . 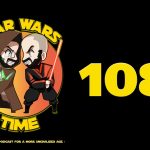 SWTS: The Clone Wars S7E10 Breakdown, Order 66, Maul is the Man, and Galaxy of Heroes Addictions