The sequel trilogy’s most curious mystery might finally be revealed through the new Star Wars comic series. Luke Skywalker’s lost lightsaber played a major role in all 3 sequel trilogy films, but it was never explained exactly how Maz Kanata came into possession of the famous weapon.

Now, Star Wars #2 has started to unravel that mystery. As the saber was tumbling down the shaft on Cloud City, a hooded figure grabs it out of the air before it hits the ground.

The big question now surrounds the hooded figure. Who is it? How did they get there?

It is now clear through the sequel trilogy that even deceased Jedi can interact with physical objects in the real world. Luke caught the Skywalker family blade when Rey threw it into the wreckage of Kylo’s Tie Silencer, and Yoda knocked Luke on the head in TLJ. So, we could be dealing with someone familiar like Obi Wan Kenobi or Qui-Gon Jinn, but the gloved hand would seems to suggest other wise.

Neither Obi or Qui-Gon wore similar gloves during their live action runs. Obi did whip gloves when wearing his battle armor in The Clone Wars television series, but these still don’t fit that build. Cal Kestis from Jedi Fallen Order wore 1 glove, and Kanan Jarrus from Star Wars Rebels worse partial gloves, so either one of these characters could be fair game.

It looks like people will have to stick around for Star Wars #3 to release before getting the next big reveal from this years long mystery. 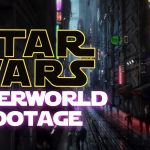 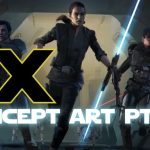 Breaking Down the New Batch of Star Wars: Duel of the Fates Concept Art