Thanks to Exclu Magazine, we now have some information and glamour shots for two new figures from the SHFiguarts line based on Disney Plus’ The Mandalorian series.

The two figures are the Mandalorian himself in full beskar armor, as well as Baby Yoda, aka, The Child. Both are due out this September, and at the time of this writing, neither are available for pre-order, but you should expect them to show up on your usual SHF toy selling sites such as BBTS, AmiAmi, and Nin-Nin-Game.

The Mando figure will come with his flamethrower, whistling birds, jetpack, knife, blaster, and his rifle with effects. He also has a fabric cape, which is a nice touch for a SHF figure. He should retail for around $75.

The Child figure comes with his crib, soup bowl, a blanket, and a carrying sack for IG-11. He also has a fabric costume, but he will be much cheaper at $35.

When we hear of pre-order information, we will update this post, so keep glued to our socials! 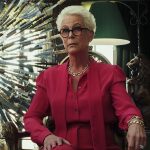