Sam Witwer, who voices Maul in The Clone Wars and Star Wars Rebels (and was at one time supposed to be Kanaan in Rebels), has been amping up the Siege of Mandalore arc for weeks now, and so far his praise for this movie-like arc has been spot on, because we all know how much everyone loved Episode 9.

Well, he’s back to making bold claims about the remaining three episodes, and is now saying that Episode 10 will “probably blow some people’s minds.” He went on to say that Episode 11 will feature things fans have “never seen before in The Clone Wars, or Star Wars” in general, before describing Episode 12’s events as being “insane.”

I dig what he’s saying and fully buy into his take on these episodes after seeing what went down in “Old Friends Not Forgotten”. Plus, based on the episode descriptions for 11 and 12, I also don’t think he’s being over the top with his descriptions of their events.

If Sam’s opinions aren’t enough for you to get more amped than ever for this week’s episode of The Clone Wars, then check out what the show’s Lighting and FX supervisor had to say about it below.

Oh we will hold you to that Gianni, but I don’t think you’re fucking around, so I’m down for the challenge.

This guy also put out a cryptic tweet last week after all of the positive fan response to Episode 9, so I’m not sure how to parse it, but the way it reads one couldn’t be blamed for thinking he’s talking about more Clone Wars action. 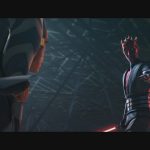 New Clip and Stills Released for The Clone Wars: The Phantom Apprentice