A new juicy Star Wars rumor has hit Reddit about a potential sequel to Star Wars Rebels, so I went ahead and hashed it out in the video below. Obviously, at this point in time this should be considered a rumor at best, but one that probably has some force behind it.

Hey now fans of the Star Wars, Matt Heywood here from the Star Wars Time Show to riff on a new rumor swirling around the fandom that doesn’t have to do with the never gonna happen JJ cut of The Rise of Skywalker. Seriously though, I’d love a 3+ hour JJ cut too, but like the Snyder cut, this thing is DOA and pure fan fiction.

Anyway, speaking of fan fiction, a Reddit user by the name of TheThrowAwayEwok dropped a new rumor for a supposed sequel series to Star Wars Rebels that is apparently in post production with a second season already being worked on.

Again, this is a unverified rumor, and a wild one at that, but one that isn’t too far from the realm of possibility considering the massive cliffhanger that the final episode of Rebels left us with, in regards to the unknown fates of Ezra and Thrawn. So while unconfirmed, this rumor probably has some juice behind it.

According to the poster who has a source, the story of this Rebels sequel will be set during the height of the New Republic, and we will get looks at the new senate, as well as the core galaxy post Return of the Jedi, but before the Age of Resistance films.

The first season will mainly setup the journey of Ahsoka and Sabine, who will be prepping for a trip to the Unknown Regions to look for Ezra, which makes sense considering how Rebels ended with an epilogue hinting at just this.

Captain Rex will also be involved, and he will team up with the ladies. It sounds like Ahsoka will also work with Kaminoans to try and halt Rex’s accelerated growth.

Naturally, the show will also feature Ezra and Thrawn, who apparently will be quasi-allies of sorts due to their time together. Fans will be introduced to the Chiss Ascendancy who will be warring with the Grysk, which are essentially the new canon version of the Vong, but will look much different.

The Chiss are rumored to be a main society in the show and Csilla will act as a hub and staging point for the show.

Thrawn’s niece will be a main character and she will be a Chiss Skywalker because she’s force sensitive and in their culture her powers are used for navigating dangerous hyperspace routes. Her and Ezra are rumored to forge a close bond in this series.

The Grysk won’t be the only threat either, as the heroes will be mixed up in the Unknown Regions, and after Rise we all know what sort of mysterious forces inhabit this region of the galaxy. The Unknown Regions will generally be the shows main mystery and its barries, so we could get some insights into Palp’s plans.

The leaker also mentioned that a potential fan favorite character will be a Rakata force sensitive that used to be a tyrant, but he’ll become Ezra’s mentor. He is morally gray, but it sounds like he’s on a path to redemption, so he should be a great new influence on Ezra if true.

The leaker wraps their dump by saying the animation style will be similar to The Clone Wars and Rebels, and the the narratives will delve into the darker, mature, and more occult side of the Star Wars franchise.

At this point in time, we should all take this with a grain of salt, because nothing has been confirmed, and the fact that the leaker states this show will drop in 2020 leaves me feeling even more suspicious about it.

I’m not saying I don’t think a Rebels follow up will happen, because one is needed to fill in some major narrative blanks, but I’m just not sure we will get one out of the blue without some sort of hype period first. Star Wars Celebration 2020 should reveal all, because if this rumor is legit, that’s when we will get an official announcement. 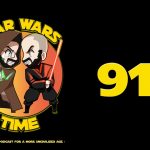