MSW has a new and intriguing to think about rumor for the Andor series on Disney Plus, and it involves an actor from the Sequel trilogy.

According to MSW, Andy Serkis was cast in the Andor series, and as fans know Mr. Serkis brought Supreme Leader Snoke to life in The Force Awakens and The Last Jedi. MSW is still reporting this as a rumor because of the logistics around who Serkis may be playing if he’s in Andor, but from what he’s heard it sounds like he is in it in some capacity.

The real question is, if Andy is in Andor, who would he be playing? Sure there is possibility of Snoke being in this timeline considering Palpatine’s experiments, which we now know date at least back to the Bad Batch era, but it’s still not clear if Snoke was truly a puppet for Palpy, or if he was at some point an actual being that the Empire used to begin its Force cloning program. It would be interesting if it were the latter, otherwise Serkis would truly just have always been a puppet as Snoke, and not some being that was used by the Empire to further Palpy’s plans.

Of course, Serkis could be playing a whole new character too, because it’s not like his actual face was ever on camera in the Sequel trilogy, so there’s always room for him just being a member of the Rebels, Empire, or another faction. 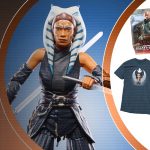