A new rumor report has been issued by Making Star Wars, and it deals with the possibility of the Obi-Wan Kenobi series having a post-credit scene attached to one of its episodes.

For those avoiding SPOILERS, you may not want to continue past the break.

According to MSW, there will indeed be a post-credit scene in Obi-Wan Kenobi, and it will be featured early on in the series. In fact, it’s sounding like the scene will take place during the credits of the second episode.

The tease itself will feature the debut of Darth Vader to the series! Apparently, due to Obi-Wan’s mission to rescue Leia, and his use of his Force powers to do so, will send ripples through the Force that ultimately awaken Darth Vader while he’s soaking in a bacta tank.

In fact, this scene sounds like the one teased many moons ago of Anakin’s healing chamber, so we will see the broken Skywalker in his tank awakening to the discovery that Kenobi is still alive.

Essentially, the Dark Lord of the Sith now knows that Kenobi has resurfaced, and moving forward he will become Vader’s chosen target. While episode two may end on a high note with Leia’s rescue, it sounds like the post-credit scene is meant to remind fans of the dire situation Kenobi just got himself in by reconnecting with the Force and getting mixed-up in galactic affairs again.

MSW went on to explain another scene that he feels will kick-off Episode 3 in which fans will see Anakin/Vader, limbless on a table, being reconstructed to begin his day. MSW said it was explained to him that this is essentially Vader’s daily routine, which consists of waking from his tank, and then suffering through his reconstruction process. It’s no wonder the dude is pissy all the time!

Nick and I will talk more about this leak on today’s episode of the SWTS, so don’t forget to tune into the Star Wars Time Show on a weekly basis via our podcast platforms or via YouTube if you prefer the livestream angle. 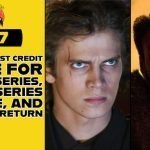